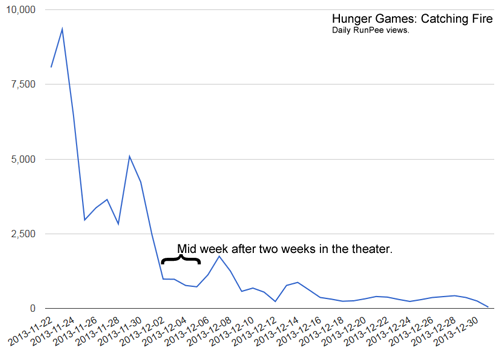 It’s been another noteworthy year for the RunPee app. The biggest change this year is unquestionably our partnership with AMC theaters. We share our data with the theater chain so that they can include RunPee data in their app. In exchange we get a yearly payment for the data and can see movies for free at AMC theaters. I think the agreement has worked out well for both parties.

We added 146 new movies to the database this year for an average of 2.8 movies/week. That gives us a total of 677 movies in the RunPee database.

Of the 146 movies added this year 27 of them are reported as having something extra after the end credits, which is about 18% of movies.

The total running time of all the movies added to the database this year comes to 16,135 minutes or about 110 minutes/movie = 1 hour 50 minutes.

Starting in July this year I began collecting analytics data on the server for each data request. That allows me to track app usage and chart which are the most popular movies. All told there were 1,410,000 views since the beginning of May which averages out to 2,115,000 for the year.

Below is a chart of the most popular movies this year according to data collected from the RunPee app.

Note: Obviously The Hobbit: Desolation of Smaug will climb up the charts quite a bit but it’s views will be split across two years.

Here are stats on movie tickets sold in the USA for the top-10 movies.

We don’t review every movie we see, because SOME people are lazy – cough, cough, my Sister, cough – but here’s a breakdown of those that we did give grades to:

The average grade handed out was a B-.

If you love big blockbuster movies but you don’t like dealing with crowds of people then I’d suggest waiting to see a movie during the middle of the week after it’s been in the theater for two weeks. Below is a chart of the daily views of The Hunger Games: Catching Fire. Notice how it really drops off after the second weekend. This pattern is consistent with all blockbuster movies.

Again, it was a pretty good year for publicity of the RunPee app. The app was called out in a number of magazines and blog posts. Most notable was an awesome review in the book Youtility: Why Smart Marketing Is about Help Not Hype

It looks like we’ll get the year off to a good start tomorrow as there’s an article, specifically about the RunPee app, due to be published in the LA Times – print/online.

I currently don’t have any specific plans for updates to the app. I think it does what it does very well, but, if you have any suggestions I’d love to hear them. I’m always looking for ways to improve the usefulness of the app without detracting from the primary feature of providing useful and accurate Peetimes.

One thing I am working on is creating a version of the RunPee app specifically tailored and translated for another country. More on that later this year.

Happy New Year to everyone out there. I hope we all get to see lots of great movies in 2014!

Feel free to comment below if you have any questions.