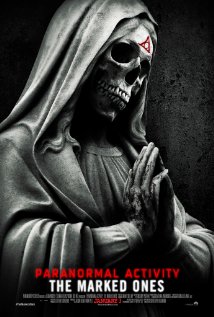 The Marked Ones really surprised me. I have been a fan of the franchise since its inception and was really leery of this new spin they were bringing. My worries were unfounded. As I sat in the theater on opening night, along with the rest of the audience, we watched a movie that made us laugh and scream. The two main characters had great chemistry and were really funny. It seemed they were funny even when they weren’t trying. However, near the end of the movie is when stuff started getting suspenseful.

This was date night for my husband and I. All you girls out there know that date night means you have just shaved your legs and you actually put on your make-up. This wasn’t a sweat pants and pony tail type of night. Through-out the movie there were numerous moments that gave me the chills. By the time we were walking out of the theater I realized that my earlier shaving of the legs was a total waste of time. I looked at my husband and apologized. I simply said, “Tonight, you’re sleeping with Sasquatch.”
I want to point out a few things that may enhance your experience. A few of the scenes that were in the trailers were not in the movie. In my opinion they made a drastic error in deleting one important scene. It takes place when Jesse goes into the basement and sees the two little girls standing there. They deleted the dialogue between Jesse the little girls. You only get a brief glimpse of them. Me and my husband were like, “Who the crap are they?” We didn’t get why they were there. After some research I figured out those little girls are supposed to be Katie and Kristi. They warn Jesse that “He is ready for you.” This all plays into the portal thing that you will learn about.

Last but not least, we sat through the credits anxiously awaiting the teaser extra that they are known for. We sat there for nothing. No extras! I couldn’t believe it. I was thinking that meant that they were finally wrapping it up. For the last week I was a little sad thinking that the movies were over. I am happy to report now that there will be another one and it is coming out in October!