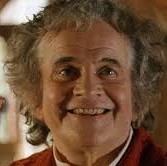 Sir Ian Holm has died as of June 19th, 2020, at the age of 88, due to complications with Parkinson’s. This versatile actor will not be forgotten, through the epic roles in epic tales he’s left behind.

There’s an old theatrical trope that says if you want to get on you’ll take any part however small; even as a spear carrier. Well, for Ian Holm that trope was his reality…he made his stage debut in 1954, at Stratford-upon-Avon, playing a spear-carrier in a staging of Othello.

From that humblest of beginnings he became an established star of the RSC and in the sixties began appearing on our televisions and film screens in various, usually small, parts. He developed a severe case of stage fright in 1976 while performing “The Iceman Cometh” and left the theatre. He has only returned three times since then; having said that he managed to pick up five best actor awards from, mainly, Moonlight (1993) and King Lear (1997) so, all in all, a reasonable comeback to the stage.

For nearly thirty years he has been the narrator for many episodes of the BBC 2 science documentary series Horizon. Authoritative, reassuring, or cautionary depending on the topic; anyone who is even vaguely geeky will have sat and listened to his voice for hours.

Ian Holm and his Movies

But, here in RunPeeLand, film rather than television is our main concern, and the first time Ian Holm made a big impression was in Alien way back in 1979. I think it says something about his acting technique that it’s about three-quarters of the way through the film before you find out he’s an android AND he has an ulterior motive! He also managed to cover up his deep loathing of milk. Guess what the white artificial blood is that he has to gargle and spit out in his final scene…

From then on he appeared in all manner of films. He was Sam Mussabini –the trainer — in Chariots Of Fire (1981), for which he was Oscar-nominated as best supporting male actor. That same year Time Bandits was released, in which he played Napoleon.

Since then he was in dozens of films, some of which are among my favourites, for instance…

A wonderful Terry Gilliam dystopian fantasy. Grey, grey, grey… most of the colour comes from the soundtrack, which is mainly arrangements of the title track! Ian Holm plays Mr. Kurtzmann with an edgy paranoia, instantly recognisable to anyone who’s worked in an admin-oriented office.

Alan Bennett has a delightful Englishness which he manages to bring to everything he writes. In this Ian has the line “I’ve never read Shakespeare, I’m a churchman”; delightfully ironic for someone who’s played almost every role from Puck to Lear and picked up a duelling scar from Laurence Olivier in a sword fight in a production of Coriolanus!

It’s no secret that I love Luc Besson’s films and this is among the top five for me. In it Ian plays a priest with an assured touch… by turns out of his depth, in charge, scared, brave, and helping to save the planet.

Woefully inaccurate on the science front but has a delightful cameo by Ian (with the woefully underused Adrian Lester) who is calmly accepting his fate of freezing to death by refusing to put the good scotch in the generator. What’s the point in keeping warm for another ten minutes if it means you don’t get to drink a nice malt… a man after my own heart!

And he ended his film career by bookending The Hobbit trilogy with cameos as the older Bilbo, the role in which he bookended the Lord Of The Rings trilogy, after which he effectively retired which, at 83, he’s entitled to; I retired at 60 so I’m in no position to criticise!

His acting style is very much reminiscent of Mies van der Rohe at the Bauhaus ”Simplicity is preferable to complexity, less is more”. He said “If you think the right thoughts, the camera will pick it up. The most important thing in the face is the eyes, and if you can make the eyes talk, you’re halfway there.”

After directing him in Henry V (1989), Kenneth Branagh defined his acting style as, “Anything you can do, I can do less of,” which, I think, says more of darling Kenny’s directorial style than it does of anyone’s acting style… I still haven’t forgiven you for buggering up Artemis Fowl, Kenneth.