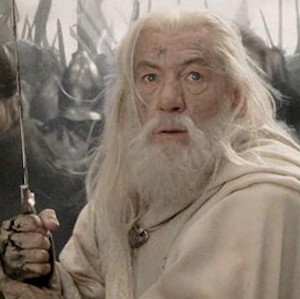 Who’s the last actor to create a character written by Shakespeare? By that I mean who was the last person to get a part written by Shakespeare and be the first one to actually perform it. Edward Alleyn? David Garrick? William Kempe? You might be surprised to hear that it is none other than Magneto/Gandalf himself: Sir Ian McKellen.

So how does one of our greatest living actors become the first person to ever perform a speech written towards the end of the sixteenth century? Perhaps, in the spirit of great drama, I’ll leave that question hanging until the end.

Dr. Sir Ian Murray McKellen CH CBE was born in the NorthWest of England just before the outbreak of the Second World War. To be more precise it was Burnley, Lancashire and 25th May 1939. In the way that young children get used to their situation, McKellen says that he got used to living in a wartime situation and only realized what ‘normality’ was when peace resumed. In a similar way to children now being a bit disconcerted seeing old footage of people shaking hands and not wearing masks, he was asked why he was so calm in the aftermath of the 11th September attacks. His reply was, “Well, darling, you forget — I slept under a steel plate until I was four years old.”

And it was those early years that shaped the talent that is Ian McKellen… NOT McKellern or McKellan!  He did wonder about adopting an easier-to-spell stage name until he remembered working with actor Timothy Carlton just after the birth of his first child, Benedict. Carlton said, “You know, my real surname, it’s not Carlton at all. It’s Cumberbatch. Can you imagine trying to have success as an actor if you’re called that?”

His love of theatre was engendered by his family with a trip to see Peter Pan at the Opera House, Manchester but his older sister Jean introduced him to Shakespeare with trips to see the Wigan Little Theatre’s amateur productions of Twelfth Night and Macbeth. These were followed shortly after by a Wigan High School for Girls production of A Midsummer Night’s Dream in which Jean McKellen played Bottom; she went on to act, produce, and direct amateur theatre until her death in November 2003.

At eighteen years old he won a scholarship to read English Literature in St Catharine’s, Cambridge and, while there, he joined the Marlowe Society to follow his love of acting and, as he correctly sensed, he would get to meet the colleges’ other queers.

While it is a shameful part of our past that we care what total strangers do with their most intimate parts when they’re together in private, it did have a benefit in actors of that generation having to hide their sexuality and this turned out to be a total boon for their careers. Being gay in those days necessitated a talent for disguise and McKellen found, in acting, a profession that rewarded this talent. Thankfully, times are starting to get more enlightened and there have been fewer, more eloquent, devoted, and dedicated proponents of LGBTQ+ rights.

He is one of the few actors who has a string of blockbuster films on his résumé but is still known as an accomplished stage actor; Patrick Stewart, Michael Gambon, Jonathan Pryce, Helen Mirren, Anthony Hopkins, and Derek Jacobi pretty much fill out the rest of the list… well, for that generation at least. And he has range… he has been the arch-villain Magneto in the early X-Men films through to the arch good guy, Gandalf, Peter Jackson’s Tolkien adaptations.

Speaking of good guys, McKellen turned down the role of Albus Dumbledore in Harry Potter and the Prisoner of Azkaban following the untimely death of Peter O’Toole. He was quoted saying “I had enough trouble living up to one legend. Two would be too much to hope for.” He also stated it would have been inappropriate to take Richard Harris’ role, as the late actor had called McKellen a “dreadful” actor.

Following his stint as Gandalf – “eight years of hobbity hills and misty mountain ranges” as he describes it – he has a souvenir tattoo of the Elvish symbol for “9” (along with the other eight members of the Fellowship. Well… seven of the eight and John Rhys-Davies’ body double!) and his sword, Glamdring, gifted to him on the last day of shooting. Glamdring is now retired and lives in the hall of his Limehouse home between Magneto’s helmet and the two two walking sticks he used in The Da Vinci Code.

Of Captains and Kings

But it is, undoubtedly, the stage where he is most happy. By my count, he has played seven of Shakespeare’s kings on stage, as well as Romeo, Iago, Claudio, Coriolanus, Faustus, Napoleon, Inspector Hound, Sir Toby Belch, Captain Hook, and Widow Twankey.

For an interview to celebrate his eightieth birthday Michael Sheen said “For me, one of the most enjoyable phases of his life was when he went: “I don’t give a fuck anymore, I’m going to do exactly what I want.” And then he did Coronation Street and panto. And loved it. I saw his Twankey and it was fantastic.”

The last sentence might not mean much to anyone outside of the UK. While there for a birthday interview text messages pinged in the next-door room, he reminisces about the advantages of a romance conducted entirely by handwritten letter. “I say to younger people, you may have instant communication on your phones, and that’s terrific. But the wonderful, thrilling pain of waiting to see if a beloved will reply to your last letter! I can’t imagine not knowing that feeling.” I have to agree with Sir Ian, I used to love the thrill of receiving a handwritten love letter and don’t envy anyone growing up without ever knowing that feeling.

The Bromance of Magneto and Professor X

Of course, there’s no way that I can write a piece about Ian McKellen without mentioning the longest-running friendship in the performing arts world but I don’t really know how to fit in a reference to Martin Scorsese and Robert De Niro… 😉

The internet caught fire when Sir Ian announced he was marrying his long-time friend and fellow mellow-voiced thespian Sir Patrick Stewart. What he didn’t let slip straight away was that he had been ordained and was conducting the ceremony between Sir Patrick and Sunny Ozell.  Having said that, while the two knights are undoubtedly very good friends, not to mention a theatrical tour de force; if you get the chance to see a version of their Waiting For Godot, grab it with both hands.

Other sources say that McKellen and Stewart have been friends since the late seventies, but that isn’t strictly true. What is true is that they met during an RSC production of A Miserable And Lonely Death at the Aldwych in 1978 but they were never actually friends; Stewart blamed that on his timidity at the time.

They actually became friends much later during the filming of X-Men when they shared adjoining luxury trailers and bonded over the “nice nibbles” Ian had made before he came to work.

And finally, how did Sir Ian manage to become the creator of a new Shakespearian character?

The best way would be to get the words from the great man’s own mouth. So, from his one-man autobiographical performance, here’s how…

“One of the plays that Shakespeare contributed a speech to was called Sir Thomas More. And the speech is special, and not just for what it said but because you can see it in his own handwriting. Uniquely, of all his works, plays, poems, the only speech that we have in his actual manuscript is this one from Sir Thomas More and you can see it in London at the British Library, it’s on permanent display. And Sir Thomas More is a lucky play for me because it wasn’t performed during Shakespeare’s lifetime. I suppose with a Catholic martyr, Sir Thomas, as the hero, perhaps the Protestant authorities wouldn’t have quite approved and so it had to wait till the twentieth century, 1964, for the first public performance. This was in Nottingham at the Playhouse, and I was in the company and they cast me as Sir Thomas More. So you’re looking perhaps at the last actor who will ever be able to say ‘I created a part by William Shakespeare’.”

chevron_left Is there anything extra during the end credits of The House Next Door?
RunPee Weekly Newsletter #67 (June 23, 2021) chevron_right