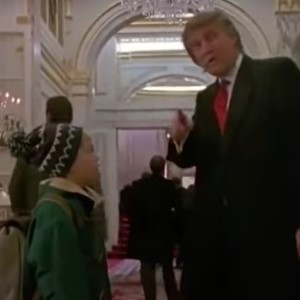 It’s another Christmas, a year later, and young Kevin is lost again.

I’m not sure if there’s some intensely bad parenting involved, or if the kid just attracts trouble, but so it goes. It’s basically Die Hard 2, with a ten-year-old, and everyone in-universe pretty much knows it. “Not again” is the theme, which I think works. Like the original Home Alone, HA 2 isn’t actually a Christmas film: it only takes place during Christmas. There’s a difference. I suggest you read my theories on Non-Christmas Christmas Films and let me know what you think.

Macaulay Culkin, once more, carries the whole movie on his narrow shoulders. He still manages to infuse his character with charm. Kevin’s a clever kid with a ton of tricks up his sleeve


Everyone else is a waste of space

Catherine O’Hara isn’t utilized properly and poor John Heard (RIP) was just there to pick up a paycheck. Joe Piscapo is spectacularly dreadful. The initial family moments recalling the first film are a crack up, but things go downhill fast from there. At least Kevin made it to the airport this time. The writing/dialog in this outing really isn’t up to snuff, so maybe there wasn’t much to work with. (You’d think the Big Apple would have a lot to work with.)

There’s a blink and you’ll miss it Donald Trump cameo that I never knew was in Home Alone 2, but it makes total sense in this setting. It’s a “huge” double-take moment in 2022, considering what’s happened in the real world since 1992!

The Wet Bandits — now the Sticky Bandits — are back, but more cartoonishly, incredibly, ridiculously stupid in this go-around. They haven’t learned a thing and should realize that chasing this kid leads to nothing good. (And yes, Kevin would be a child murderer if any of this was real.)

I also think the Big Apple could have been used to better effect. It should have leaned into the more humourous and iconic elements of the setting — they definitely filmed on location in parts but depended on too many establishing shots that didn’t convince.

What I liked: the theme of not judging someone because they look different is back. Instead of Old Man Marley, we get a pigeon lady. Those characters are just lovely; my favorite parts of both films.

I don’t want to diss this film unnecessarily. I wish I had more to say about it. The original Home Alone raised the bar so high that this…average effort seems the worse for it.

This isn’t a bad sequel, but it’s not as funny, clever, or cute as the first

I think I’ll fold at this point; I hear the next FOUR subsequent sequels aren’t worth watching. This clocks in with a grand total of 6 Home Alone movies, with various precocious children. Did you even know this was a franchise? Apparently Home Sweet Home Alone came out this year (2021), but we at RunPee haven’t heard of it. Granted, since it’s the second year of the pandemic, most movies didn’t hit actual theaters. We’re not perturbed. Maybe we’re even relieved we didn’t have to see it.

Is Home Alone 2 still worth seeing?

If you love Home Alone 1 and want to see more of the same, take a look. I would have liked to see the holiday hijinks happen in the fabulous toy store, but I guess FAO Shwartz wasn’t up for it.