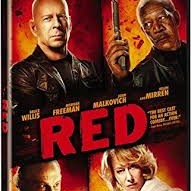 To start with, the title RED in this film is an acronym for Retired, Extremely Dangerous. As retirees, we see these characters don’t have much of a life anymore. That’s the set-up, starting with Bruce Willis’ Frank Moses, lost in an empty house devoid of personal decor. I can see where it would be tough for such deadly folks to ease back into American suburbia, after a career of honing themselves into CIA weapons.

[pullquote]What do you do, after a rough life of adventure and government-condoned murder?[/pullquote] Make bogus government paycheck calls in a desperate attempt to connect with someone, like Bruce Willis’ infamous black-ops character? Pine away over lost love, like Brian Cox’s Russian spy; live in a bunker, like John Malcovich’s crazy bomber; or make flower arrangements and bake like a Martha Stewart clone, as Helen Mirren’s wetworks expert is reduced to?

These are good questions, and I don’t know how the real-life ex-agents manage to “transition,” as Moses puts it.

In RED, it’s nice to see the connection — and grudging respect — growing between Karl Urban’s ambitious young agent, in contrast to Willis’ older, jaded Moses. Urban’s Cooper is well on his way to becoming just like the people he’s hunting, but we start rooting for all of them somewhere along the way. [pullquote]There’s a lot of care to establish these characters as gifted, yet fallible people, and not impervious superhero agents.[/pullquote] They take bullets, make costly mistakes, love the wrong people, and — in spite of the pain —  they miss the old days.

Make no mistake.[pullquote position=”right”]This is a clever, funny movie. It doesn’t shy from violence, but there’s a lot of discretion shots and it’s not gory. The soundtrack is absolutely affable, with the whole affair as slick and stylish as Pulp Fiction — or even better, an older and more lethal version of Ocean’s 11. [/pullquote]When Freeman gleefully announces, “The band’s getting back together,”  I wanted to cheer.

These actors are known for their authentic character roles over decades of work, and the ensemble meshed like magic. I couldn’t get enough of their amusingly tense sparring, and can’t wait to see the sequel I somehow missed the first time around. I’ll catch RED 2 next and see if the story picks up right where it leaves off.

Helen Mirren’s Virginia reminded me of a gleeful, older Xena: Warrior Princess. She has the same focused, deadly, competent joy in her work; she just seemed grateful to get to murder with the other kids again. You go, Dame Mirren!

Even though this movie came out in 2010,  the actors haven’t aged at all. Morgan Freeman and Mirren both just headlined a brand-new fantasy feature this week (The Nutcracker and the 4 Realms), and honestly, they look the same. Good genes, I guess. (I don’t think Morgan Freeman ages. He did play God once…)

Usually the villains in CIA/FBI shoot-em-up movies are lame, with the MacGuffins fungible. Here, I felt invested in the stakes and cared about the outcome. The Vice President was a sad figure in the end. That worked.

Richard Dreyfuss’ self-titled Bad Guy was a bit over the top (not in the good way), and detracted somewhat from the otherwise graceful “execution” (lol) of a really enjoyable thriller. Dreyfuss is usually an extremely competent actor. But his was the only off-key note in RED. Maybe I can  blame the director for that.

Basically, this is darn good movie that holds up nicely over time. I’m excited to view the sequel tonite, and will post a review to the link soon.