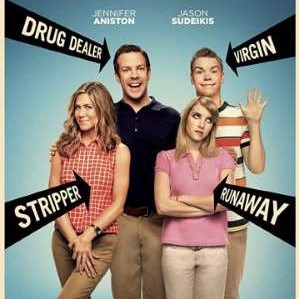 We’re the Millers definitely surprised me. I had seen trailers for it for months and thought it looked good, but was worried that they had already shown us all the good stuff. Thankfully, I was wrong. There were many scenes that were over the top funny that I hadn’t seen yet.

Will Poulter, who played Kenny, was amazing. Sometimes it wasn’t even the things he was saying, but rather how he looked while saying them. There is a scene where he sings along to a song by TLC that made the whole movie for me. Ed Helms was another show-stealer. He played the rich drug supplier to Jason Sudeikis. Again, it wasn’t just his lines but how he delivered them that had me convulsing in laughter.

The movie never lagged. They kept a good pace throughout and I walked out feeling satisfied. This would be a good date night movie. Lots of laughs, a fun story line and a happy little ending.

About The Peetimes: I recommend the second peetime. The first is okay if you can’t wait but that is when you first meet the very colorful Fitzgeralds.

There are no extra scenes during, or after, the end credits of We’re The Millers. (What we mean by Anything Extra)