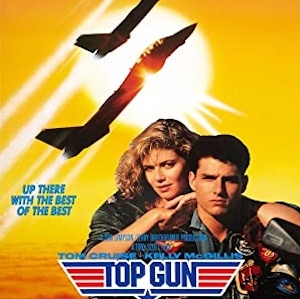 Just as the same man cannot step into the same river twice, neither can the same movie critic review the same movie twice. The movie may not change, but the reviewer is never the same from one viewing to the next. Especially when there are about 30 years between viewings.

I know from firsthand experience that there have been many movies that I initially didn’t care for but later came to love—The Fifth Element and Pacific Rim leap to mind. And the reverse is also true. If you asked teenage me to grade Top Gun back in 1986 I’m sure it was an A+. And I’d have to say primarily because Maverick represented the paradigm of youthful confidence, especially when it came to women. No doubt, teenage me wished he could be that confident and bold around women.


However, add 30+ years of maturity and a #MeToo movement and I see the movie in an entirely new light. If this same movie was released today, yikes. I can’t imagine the controversy it would stir. To be fair, Charlie was Maverick’s superior. I’m not saying that excuses all of Maverick’s actions, but it does mitigate it somewhat.

I don’t think it’s debatable to say that Top Gun, and similar movies, were a major influence on the youth of the late 1980s, both male and female. Just as young men saw Maverick as someone to aspire to I wonder how many young women saw this and pictured themselves as the subject of such attention. I think it’s safe to say Top Gun wasn’t remotely a good influence then or now.

Aside from the retroactive #MeToo criticisms, Top Gun is formulaic to be sure. But this is a movie that came out in 1986. It’s more like Top Gun is one of the original molds for the future action movies that would make heroes out of young, bold, sexist men who overcome their internal battles on the way to success.

The script is simple but sprinkled with numerous memorable lines, such as: I feel the need, the need for speed; take me to bed or lose me forever; I could tell you, but then I’d have to kill you, turn and burn, I could go on.

One scene that I recall bothering me even as a teenager was after Goose’s death his Maverick and Goose’s wife meet and she consoles him like he was the one who needed support. She just lost her husband, the father of her son, but let’s make sure the hero of the story gets the emotional support he needs.

What I’m most looking forward to seeing in the new Top Gun: Maverick is how they treat his maturity and relationship with women. The last I checked TG: Maverick has a 96% by critics on RottenTomatoes, with over 100 ratings. I can only imagine that Maverick has come full circle and has matured.

About The Peetimes: I have three decent Peetimes, but none that I’d recommend over the others. Obviously, there are a lot of iconic lines and scenes that I tried to avoid but it’s not possible to avoid all of them.

There are no extra scenes during, or after, the end credits of Top Gun 1986.

Plot
Call-sign “Maverick”, LT Pete Mitchell, the impetuous daredevil Navy-pilot ace, is accepted into Miramar’s elite Fighter School, also known as “Top Gun”. There, as the impulsive pilot competes with the best of the best, not only will he meet Charlie, the flying school’s curvaceous astrophysics instructor, but also the brilliant and highly competitive fellow student, “Iceman”, with whom right from the start, he will engage in a reckless contest. As Maverick is haunted by his father’s mysterious death, will he be able to suppress his wild nature to win the prestigious Top Gun Trophy?

chevron_left 5 Tips To Make A Perfect Film Review
Is there anything extra during the end credits of Top Gun 1986? chevron_right