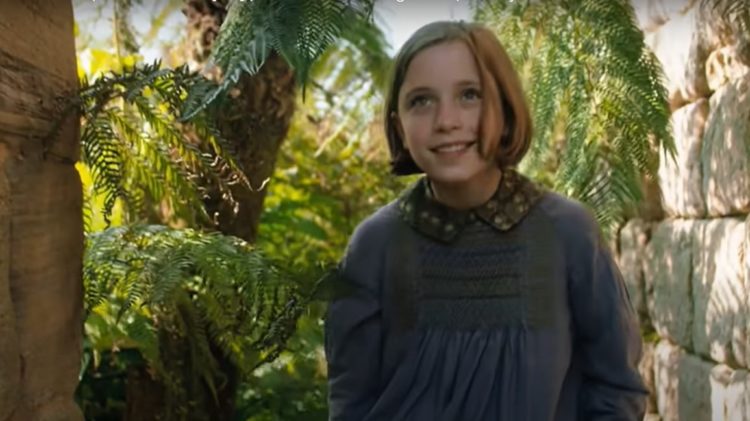 I’m a huge Secret Garden fan and have been since a wonderful teacher read it chapter by chapter to my rapt class in the 4th grade. It’s on my top ten list of favorite children’s books, and will be getting a reread review this year as I work through my stack of morning yoga reads.

Back to the 4th grade. We sat in the darkened room, enthralled by the idea of howling moors, a huge empty mansion, and the notion of a forgotten walled garden slowly coming to life in the springtime…and how such natural ‘magic’ can heal the two young, entitled, and all-but abandoned children. Not to mention such indelible characters like the country boy Dickon, who damaged animals instinctively trust, which also gains the trust of the somewhat feral Mary and Colin.

At least, that is the most obvious takeaway from 2020’s The Secret Garden. The story — and the garden itself — also heals some damaged adults, namely Colin’s father, a man tortured by grief.


I’ve seen two Secret Garden movies this year. I’m not fond of either. One for not doing enough, and the other for taking out every great story element and imposing something else. This movie is of the latter sort.

Instead of carefully building great characters coming together to nurture a ‘dead’ garden and thereby healing themselves, this Secret Garden movie has the garden ready-made and turns the focus on grief, loss, and more grief.

In this version, everyone is grieving, including Dickon (which is unnecessary) and the dog (who isn’t in the book). Everyone manages their grief in different ways, with the garden magically responding to the outpourings of emotion. The big empty manor too, becomes a magical place full of haunted sightings of the people left behind. There’s a LOT of imaginary scenes here. I don’t recall young Mary having such insight or powers of imagination. This changes her character completely, and doesn’t serve the spirit of the novel at all. And the ‘magic’ is more overtly fantasy than anything ever implied in the source material.

Young Colin Craven is a little closer to the book, but his tantrums and transitions are not handled well. We don’t learn to care for him, not much. His big scene at the end with his father is completely botched as well. The camera can’t even be bothered to stick with him as he…well…does a momentous thing.

A tale of two Colins…

Which brings me to poor Colin Firth.

I’ve never seen such a poor performance from him. They turned a sad and lonely character — who is still a kind man (the “Can I have a bit of earth?” scene is entirely missing) — and turns him almost maniacal in his grief. Turning Archibald Craven into a quasi-villain was a bad move. We already had Mrs. Medlock for that. Making Colin’s father so completely unhinged by his grief robbed the climax of any significance (and by the way, was so oddly staged that I can’t imagine anyone caring about that scene).

I understand devastating, incapacitating grief. There’s nothing you can do about it except allow for time to pass and try to not make things worse. I threw myself into writing to get out of my hole, but if I’d had a ‘bit of earth’ myself, the natural healing power of nature could have helped bring me back to life sooner. And that’s the beating heart of the novel’s Secret Garden, which this movie just blows past in order to focus on imaginary scenes of dead people. Indeed, Mary “sees dead people.” The dead people even save living people in a burning building.

And if you’re a fan of the novel, now you understand just how off-track this movie adaptation is.

I couldn’t wait for this film to end so I could be done with it. I finished it because I’m a completist, and because I want to write up the reviews comparing this Secret Garden, 1993’s pedestrian ‘garden-variety’ (ha!) Secret Garden, and of course the classic, witty, and luminous Secret Garden novel from 1911.

Some good, but mostly bad

So the 2020 version gets a few points for being pretty. The garden is a visual delight. The dog and Dickon are stand-outs. Mary is played with shy sincerity, but frequently comes across as a young mutant, a la Miss Peregrin’s Home for Peculiar Children. To be honest, that sort of weirdness doesn’t work here.

Colin Firth must not have read the book, because his character was an appalling, unappealing misstep. Firth himself looked absolutely checked out. I understand his character isn’t a happy man, but he was never intended to be bumbling or mean.

I can’t in conscience recommend this as a good movie, and the unending focus on intense, unending loss won’t be of service to anyone dealing with their own grief.

Instead of being inspiring, this movie just sits there. Looking pretty, as I said. And that’s just not enough.

Starring Colin Firth, not at his best. Julie Walters is in it too, in a thankless role.

chevron_left Is there anything extra during the end credits of In the Earth?
10 Movies Every Female Entrepreneur Should Watch chevron_right