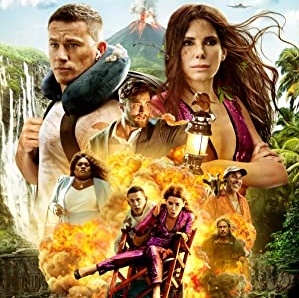 As RomComs go, this was one of the best. They nailed the comedy portion. Channing and Sandra are brilliant comedic actors and the dialog they had to work with was spot on. Major props to the screenwriters Oren Uziel, Dana Fox, Adam Nee. It felt as though the script was written to each of the actor’s strengths.

In my experience, RomComs rarely get the romance portion right. At least very few of them are really believable. It’s often too contrived or forced to feel right. But again here, the screenwriters nailed it. The character motivation and development were completely believable.


As chance would have it, my wife and I rewatched Romancing The Stone recently. Truthfully, it was a rewatch for me, but my wife had never seen it. I’m really glad we did because there are patently obvious parallels between Romancing The Stone and The Lost City. The Lost City isn’t at all a rehash of Romancing The Stone, but there are numerous scenes that pay homage to the classic. Besides the obvious romance novelist in distress and treasure hunting, there are numerous other parallels that I will leave it to you to spot. I’d highly recommend rewatching RTS again before going to see The Lost City so you’ll have a refresher. I think it will make it more enjoyable.

One thing that could have really made this movie a total hoot would have been to cast Kathleen Turner as Loretta’s publisher. I wonder if that was ever a consideration. They could have even brought in Michael Douglas for a cameo as the airplane pilot which would have been priceless. As it was, it was nice to see Oscar Nuñez get a callback with his small role as the pilot. If you remember, he was the jack-of-all-trades in The Proposal.

I think The Lost City will age nicely. It feels like a movie that will be fun to rewatch every now and then as the years go by just for the humor. Hopefully, there will be many sequels to come.

About The Peetimes: We have three good Peetimes. There isn’t a bad choice in the group, but I’d go with the 2nd Peetime as the overall best one.

There are extra scenes during, or after, the end credits of The Lost City.

Plot
A reclusive romance novelist on a book tour with her cover model gets swept up in a kidnapping attempt that lands them both in a cutthroat jungle adventure.

chevron_left M. Night Shyamalan’s movie not so “Old”
Is there anything extra during the end credits of The Lost City? chevron_right