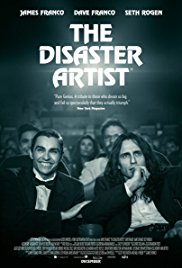 I’m working on my review for The Disaster Artist right now, but wanted to give you a heads up while I do it. It’s hilarious, and full of amazing actor and director cameos. The audience was into it in a way that I haven’t seen since my last midnight showing of The Rocky Horror Picture Show, 30 years ago. Hold tight; the longer review is coming shortly…

Update — Okay, here we go, for what it’s worth…

When I went into the theater, I was shocked: the room was jam packed, and before I entered, there was a professional fellow handing out intensely detailed questionnaires about the film. I’d never seen that in all these years of doing Peetimes in the theaters. Another cool thing: I got a “Tommy’s World” Planet Pen for finishing the questionnaire. (I love this pen: it’s a copy of the same one Tommy gives Greg, early on in the film. So, yeah, I have one now. Sweet).


(Also, I have an extra copy of the long, specifically picayune questionnaire, filled with bubbles to mark in. It reminds me of an SAT test. Seriously.)

The thing about this movie: it’s more of an experience than just a passive viewing. The audience clapped, laughed, roared, yelled, and shouted lines as the actors said them. This might have been a select group of people who loved the cult film “The Room” that this was based on (okay, it clearly must have been), so your experience might be less participatory. BUT, I promise it will still be a good time. I laughed more at The Disaster Artist than any film since A Fish Called Wanda, A Knight’s Tale, or Deadpool (my high-water funny-movie marks). It’s seriously weird, but never dumb.

Strangely, there’s really nothing amazing about The Disaster Artist as a story. Period. It’s got a lot of cringe humor (which I don’t normally like). There’s no plot. You just go with the smartly sharp nonsense. It’s a very cool film on several levels, and it’s not actually mindless…there’s a lot going on, but with great sound and fury, signifying nothing. Am I making any sense? Because the film doesn’t. 🙂

I did not hit her! I did nooot…

You can probably see I ‘m having a hard time reviewing this film. Here’s the deal: it’s wacky, funny, and chock-full of exciting entertainment cameos. I think everyone in the Industry wanted to be in this film! It’s a lovely tribute to Franco that he’s so beloved in entertainment circles, and he really does quite an unrestrained, committed job inhabiting his whack-job role of Tommy. (There’s also a ton of Easter Eggs and in-jokes, if you keep your eyes open.)

Seth Rogen, as the film-within-a-film director, also deserves a shout out: he’s hysterical. Dave Franco, James’ real-life brother, is serviceable as Greg, and adds a grounding component to the story. He’s the Luke Skywalker to James’s crazed Obi-Won Kenobi.

So, should you see this film? Well, yes. (Duh. I don’t give out A grades willy-nilly.) If you’ve seen the cult classic “The Room”, you’ll be freakishly happy with this “making of” version. Definitely stick around for the mid-credit side-by-side scenes, so you too can shout, “You’re tearing me apart, Lisa!”

And, if you are a complete newbie to “The Room” (I was), it’s still a hoot from beginning to end. Weird! Oddishly fun. Okay, I’ve said enough. Enjoy.

Leave your stupid comments in your pocket!

Actually, feel free to comment with your favorite freakishly weird quotes from The Room…