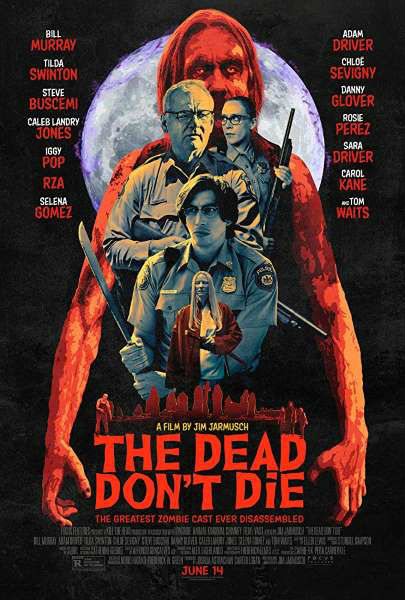 Dead Don’t Die as super low budget movie is somewhat cute, but nothing really good. Don’t see it in the theaters: its a good one to wait for streaming. Save your theater money now for the better movies.

There was one cool idea — zombies are attracted to what interested them most while alive. The same thing was done better in Shaun of the Dead though.

It could become a cult favorite later – it was a Cannes Indie darling. Probably from all the cameos.

There was a lot of good quiet interplay charisma between Bill Murray and Adam Driver, and the unusual direction was cool. That worked. The over-stuffed cameos were wasted though.

I was overall quite disappointed, and the cinema room was empty to boot. I might bump this up to a B- minus later. The humor was there, but it was the quiet kind.

About The Peetimes: This movie was both easy to make Peetimes for and hard. Easy because there are many meaningless dialog scenes, and hard because the film is packed with cameos. I did the best I could to keep the best scenes — between Bill Murray and Adam Driver — out of the Peetimes. It’s a short movie so I only made 2 Peetimes. FYI, there are no End Credit extras and the credits themselves only ran 30 seconds. The app won’t accept that, so it says 1 minute.

There are no extra scenes during, or after, the end credits of The Dead Don’t Die. (What we mean by Anything Extra.)