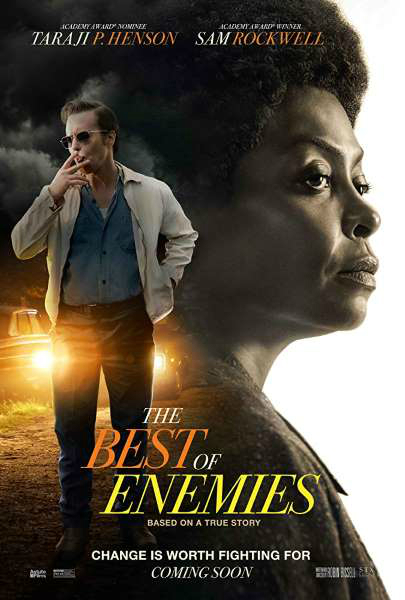 This biopic is set in Durham, North Carolina, in 1971. First of all, the plot took me by surprise, given the magnitude of racial tension that still exists. This is not your normal racially-charged kind of black-versus-white-movie where tensions escalate, folks get hung, justice is never served, and everyone walks out the movie theater quiet and mad as hell. Nope, this one is completely different.

Durham is faced with a court-order to desegregate its schools when the black school becomes severely damaged, and those students need a place to learn. Unfortunately, the whites are against the blacks coming to their school, so a court-order is issued, and the town must figure out how to solve the problem themselves with little financial help from the State. The State calls upon the help of a Raleigh organizer known for his success in implementing charrettes.

char·rette /SHəˈret/ (wiki)
a meeting in which all stakeholders in a project attempt to resolve conflicts and map solutions.

During the span of the Durham charrette meetings, two co-chairs are selected who are the most vocal/influential in the white and black communities, respectively; then more community members discuss issues and concerns, a senate is developed of representatives that will vote on desegregating the schools overseen by the co-chairs, and an open-forum is held where everyone from the community are invited to witness the voting process.

Ann Atwater (Taraji P. Henson) and C.P. Ellis (Sam Rockwell) are chosen as the co-chairs. C.P. is the president of the Ku Klux Klan and Ann is an aggressive and “by any means necessary” community activist. The two of them know of each other very well and the thought of working together for the charrette makes their blood boil, but they agree to co-chair for selfish motives. C.P. is a typical KKK member with a family and owns a gas station. He has a son with Down Syndrome that doesn’t live with the family, but in a nearby psychiatric center. While C.P. is a tough guy filled with hatred, his weakness and soft spot is his ill son. Despite the hatred Ann has for C.P., she uses this weak spot to forge their Best of Enemies relationship.

While the relationship isn’t like that seen in the movie Greenbook, Ann softens C.P.’s heart, one artery at a time. The dynamics of how their role in the charrette plays out is really interesting and thought-provoking. C.P. discovers the void in his life as a child that influenced his membership into the KKK may no longer be valid, but that epiphany comes with drastic consequences. However, his newfound friend comes to his rescue, yet again.

Overall, the acting was good. The plot kept a good pace and didn’t dilly-dally to get to the climax. Ann’s brass and sassy humor will have you laughing throughout the entire movie. In addition, Taraji’s acting was spot-on, right down to that walk (I chuckled a couple of times watching that walk).

On the other hand, the plot doesn’t provoke a need to discuss the issues with friends later on after seeing the movie. The movie will, however, stimulate some self-reflection on how we treat others. But, given that our country seems to be widely-divided right now and sometimes mirrors the 60s and 70s racial undertones, I’m not sure many people will leave the theater creating a charrette of their own, or singing Kumbayah. Wait for the credits at the end to discover how C.P. and Ann’s friendship evolved after the charrette experience.

About The Peetimes: It was difficult finding good Peetimes for this well edited and well paced movie. At times, it seemed like the start of a scene would make a good Peetime, but then the plot thickened, adding value to the story. I would suggest suggest the 2nd Peetime.

There are extra scenes during, or after, the end credits of The Best of Enemies. (What we mean by Anything Extra.)

DanaSimone!
DanaSimone!’s love for movies and AMC Theaters started when she was a youngster in Detroit.  By day, she saves the world from financial ruin, and by night wears a superwoman cape (literally) as a mom, wife, speaker, philanthropist, travel agent, and up-and-coming social media influencer. She’s the creator of the #FemaleMasterpiece empowerment movement and a former talk show host.  Stalk her on YouTube channel “DanaSimone!”and check our her cool app.
chevron_left Movie Review – Pet Sematary – A Worthy Adaptation
Spoiler Avoidance Strategies If You Can’t See Endgame Opening Night chevron_right