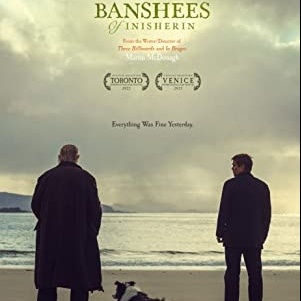 The Banshees of Inisherin was a very good movie for being a slow burn, with not much happening. The sparse dialog was always compelling, the acting calibre outstanding — with the always reliable Brendan Gleeson and Colin Farrell shouldering the bulk — and the Irish Aran Island/Cliffs of Moher scenery was, well…spectacular doesn’t do it justice. Having just spent a month in that exact spot in Ireland (by complete coincidence), I looked forward to returning to this ancient, stunning area in lush detail. By any sort of movie rating, Banshees is a great movie experience.
But Banshees was also a terrible, awful film.
Some movies should come with a trigger warning, as there are just some things you can’t unsee. If you’re squeamish about the mutilation of body parts, this really isn’t the film for you. I don’t generally see Dramas, as they are outside my genre, and I consider most Dramas just Misery Porn. Your own tolerance will vary.
I find Gleeson’s character of Colm a mystery. I get his need to become something more than what his parochial, backwards bit of nowhere offered. His motivations to create a sort of greatness were clear. What he actually DOES about it all is terrible. Who does this? Why did he have to go the route he took? While very interesting, in real life I would have to ask myself if what he did was going to increase his happiness in any way.
I guess at the least he got a story in the end that will be told and retold in generations to come. So…yay Colm?
If I’m being vague, it’s on purpose. If you want to see Banshees, you deserve to be surprised.
Colin Farrell as Pádraic is wonderful. He completely becomes this simple, somewhat slow man. I didn’t question his character at all, and felt Pádraic’s pain as terrible things befell him. His fury in the end is believable. I wanted him to do what he did myself. I was impressed and relieved he had no ill will towards Colm’s border collie. In the end, Pádraic has his animals, and that could be enough.
Is this a straight drama? There are very strong hints that something like the Loom of Fate is at work through the “Banshee” in question. But this is in no way a fantasy or carefree film. Bad things happen, and the bits of humor sprinkled around offer very little respite. Somehow, for whatever reason, Rotten Tomatoes and the IMDb list The Banshees of Inisherin as a Comedy. The movie poster at my theater has review quotes like “spectacularly funny” …Don’t be misled. It’s an A level film, but pure grade Misery Porn.

About The Peetimes: This was a long slow film with many scenes that were easy enough to pop out to the restroom, but you don’t want to miss the important moments of drama. Any of the Peetimes work well.


There are no extra scenes during, or after, the end credits of The Banshees of Inisherin.

Plot
Two lifelong friends find themselves at an impasse when one abruptly ends their relationship, with alarming consequences for both of them.

chevron_left Movie Review – Terrifier 2
Motivational Movies for Teachers: How to Teach and Not Burn Out chevron_right