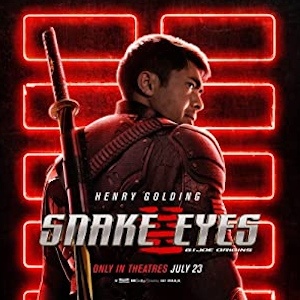 The first third of Snake Eyes had the potential to be a mediocre movie. But in the middle third, it went downhill quickly. There was hope that the action-packed final third would make up for it, but no. It was even worse. Any good action shots were in the movie trailer, which is usually a good indicator that the movie is going to be disappointing.

Plot (Spoilers)
A G.I. Joe spin-off centered around the character of Snake Eyes.

I’m sure no one expects the acting in Snake Eyes to be very good, so at least they won’t be disappointed.


Even still, there were a few cringe-worthy moments involving the secondary characters. I don’t like to single out a specific actor for a bad performance, but the character of Scarlett was so horribly written and directed that even an extremely talented actress would be challenged to just deliver a mediocre performance. And the access who played Scarlett isn’t extremely talented.

Which leads to the MCU-wanna-be effect. The Scarlett character is a red-headed, bad-ass, secret agent type. Really? Could they be less original? To top it off, the movie revolves around a wanna-be Infinity Stone — from space, no less. I know zero about the GI Joe comic stories, but adding that stone was just lame beyond lameness.

Aside: I think we are due for a whole host of really bad movies that try to emulate the MCU. The MCU pulled off Infinity Stones, magic realms, life after death scenes, you name it. They pulled it off because they built a framework of a story around it that made it work. You can’t just grab a trope like magical stones and throw it into a movie and expect it to work.

The action scenes were choppy to the point of boredom. Especially in the sword-orgy fights. And that’s another trope that they pulled out over and over again. I lost count of the number of sword fighting scenes that involved one man vs a dozen. There’s no realistic way to pull that off in an open space. Someone needs to shove a sword through this trope’s heart and kill it once and for all.

Do yourself a favor; just wait to see this movie when it’s streaming, and hopefully, by then you’ll forget about it and can skip it altogether.

The RunPee Peeple’s Poll currently has the expectation for Snake Eyes at 7.4 and the final rating at 5.8. This might be the worst-performing movie vs expectation for the year.

About The Peetimes: We have 3 Peetimes for you. The first 2 are really good and we recommend either of them. The last Peetime is for emergencies only, but it’s the last break before the action starts.

There are extra scenes during, or after, the end credits of Snake Eyes. (What we mean by Anything Extra.)