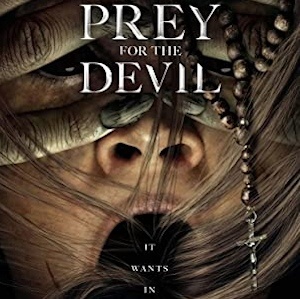 Prey For the Devil didn’t live up to the expectation that the trailers promised us. I will give them credit for a few jump moments that I didn’t see coming and some new special effects that I also haven’t seen before. They were fairly cringeworthy, so kudos for those bonuses. The tone and setting were very controlled throughout the whole movie, I felt cold the entire time I was watching. The acting was also very good. Everybody brought their own style and it made for a great cast. Those are my plusses.

My one main negative, it’s old. It’s been done a thousand previous times and it was totally predictable. I would rate this movie best left for cuddling up on the couch and having a night in.

About The Peetimes: Luckily this is a pretty short movie so hopefully, you’ll only need 1 time to go. I highly recommend the 1st Peetime, I only stuck the 2nd one in for emergencies.

There are no extra scenes during, or after, the end credits of Prey for the Devil.

Plot
According to real-life Vatican reports, occurrences of demonic possession have increased significantly in recent years. In response, the Catholic church has secretly reopened exorcism schools to train priests in the sacred rite. The Devil’s Light immerses you into the world of one of these schools; humanity’s last line of defense against the powers of everlasting evil. Jacqueline Byers (“Roadies,” “Salvation”) stars as Sister Ann, who devoutly believes that performing exorcisms is her calling, despite the fact that historically only priests – not sisters – are allowed to perform them. When one professor senses her special gift, allowing her to be the first nun to study and master the ritual, her own soul will be in danger as the demonic forces she battles reveal a mysterious connection to her traumatic past.