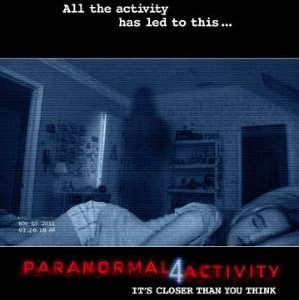 I want to start off by saying the last thirty minutes of the movie is what made it watchable. I enjoyed those few minutes. My legs were in a constant state of chill bumps and I have to admit my hands flew up to my face of their own accord a few times. That being said the rest of the movie kind of ticked me off.

The movie begins by showing clips of the previous movies. They catch you up as to what has transpired so far. Katie kills Micah, she goes to her sister’s house and kills her, takes sister’s baby and leaves. We remember all of that. It now jumps ahead five years and we meet a whole new family.

The new family sucks. Mom and Dad are so forgettable that IMDB doesn’t even have them listed in the cast. Alex is the big sister, I felt sorry for her because her parents were so stupid. Her boyfriend Ben was my favorite part of the movie. He is one of those guys that are funny even when he’s not trying to be. Then there is the little brother Wyatt. Not much to say about him. All in all they give you a typical suburban family that is a lot on the dysfunctional side. Then you meet Robbie. The kid that lives across the street. This little dude is creepy. Now…let the movie begin. In about an hour.


I get that they are trying to build up the suspense. I just hated the way they did it. My gripe is they used the whole ostrich with his head in the sand kind of mind set for the parents. I don’t want to give away any spoilers but if I were Alex, CPS would have been on my speed dial. “Hello, CPS? Yeah, my parents are so ridiculously clueless to mine and my brother’s safety that I would like to be put in foster care. Thank you, please send someone immediately.”

I suppose the writers had a method to their madness but I think it fell flat on their faces. It wasn’t just me sitting there thinking how bad the build up was. As people were leaving the theater I listened in on their comments. About 90 % of them were negative. I hate giving bad reviews but this movie could have been better.

About The Peetimes: The actual run time of this movie was 1 hour 22 minutes. I only submitted one time due to the movie being so short. Don’t forget: there are extras at the end!

There are extra scenes during, or after, the end credits of Paranormal Activity 4. (What we mean by Anything Extra)