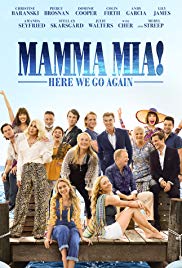 Mamma Mia: Here We Go Again was very cute, but had no plot. It existed solely to let the actors sing some ABBA songs, cheerfully ignoring characterization, storybuilding, and conflict resolution.  These things largely didn’t exist.  It was…an energetically lazy movie, I hate to say.

I’m a HUGE fan of the first Mamma Mia film and play it all the time in the background to sing, dance and laugh to…but the original had an actual narrative. A really good one. [pullquote]This sequel/prequel mix was pretty odd: nothing significant happened during the entire runtime. It exists as a long music video. Which is fine, if that is all you want for your evening.[/pullquote]

The very first showing was sold out, so I had to wait for the next one. I didn’t realize other people loved the original movie as much as I did! That night, the audience happily sang all the songs with the movie. It was a good time, but not worth paying modern  movie ticket prices for. MM2 didn’t even have the pretty island scenes from the first film, and I wonder if most of it was filmed in a sound stage. [pullquote position=”right”]It felt like a fan film in a lot of ways.[/pullquote] I think this is better served up via DVD release.


It’s actually hard to grade a movie like this. The music was great and there was a lot of energy from all the actors. There just wasn’t any…you know…acting.

Also, Cher (this isn’t a spoiler, as she was a big part of every trailer) had no business being in this film. She appeared as a gimmick, and as an excuse to sing a particular, popular ABBA song they needed to squeeze in there.  And — here’s an even bigger peeve — she took time away from the actual, legitimate cameo (which I won’t spoil) that was a lovely and much-needed wrap up to the film. Cher stole that actor’s thunder for no narrative reason. They didn’t develop the Grandma character at all, or come to any kind of plot explanation for her arrival 1. being a problem before, and 2. suddenly not being a problem now.  I’d love to chat with someone about this.

Needless to say, the Dynamo women (both older and younger versions) were not given anything to do at all. They showed no growth from the previous film and had no story arcs, except an awkward, unpleasant, clearly squished-in-there piece of ‘mid-story’ for one of them. (Sorry about the vagueness — I’m trying to stay spoiler-free.)

The three adult fathers also had zilch to do, aside from one set of sweet and funny lines that they put (of course) right in the trailer.

[pullquote]With the first movie so richly envisioned, acted, and natural-seeming, MM2 felt forced, aimless, and empty. The songs in the original didn’t feel like excuses to sing any particular song.[/pullquote] For its genre, it was quite clever! This one was overly stuffed with songs and it felt like the writers were cheating. Even the Dancing Queen reprise lacked any of the empowering charm of the first.  If we just wanted to listen to ABBA, that’s what You Tube is for.

However, a patron leaving the theater told me he would grade this one an A-. So….take my review with a bit of salt. If you go see it, at least realize you are paying for the experience with an audience to sing along with, than viewing  a thoughtfully developed film.

Movie Grade: C+ (For good musical numbers, but no actual plot or characterization)

Peetime Data: Since this was a musical movie, it made finding Peetimes easy. The meta tells you what the songs are, so you won’t have to miss your favorite. Heads up: One thing to be aware of is the way the movie cuts back and forth through time. The scenes with Sophie are in the present. The Donna scenes are from that long ago summer she fell for 3 men. You will be all set if you read the Peetime meta details.