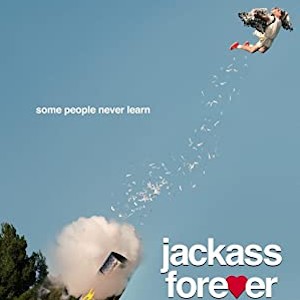 Dear Lord, I didn’t know I could laugh so hard. From the opening scene to the end credits I laughed, then laughed more. They pulled all the stops in Jackass Forever. I’m giving this an A for sure. They had one goal in mind and that was to make us go ouch and laugh and that we did. My theater was sold out and every single person in there was in hysterics. I saw some things that I can never un-see; I was actually wondering how demented my dreams were gonna be since my brain was inundated with super painful treatment of a man’s southern region.

Even though all the guys are getting older and own that, they still go balls to the wall. Literally. I can’t stress enough how much they torture a man’s stuff. This film delivers laughs at a break-neck speed. Also, literally. Knoxville was the first to break a bone in filming. A good time for all.


One final note, no child should see this movie. There have been a few R-rated movies that my granddaughter has seen but I can guarantee you she won’t see this until she’s thirty. At least.

About The Peetimes: Since this movie is nothing but different pranks and stunts, if you get up for any reason you’re not going to be lost, you’ll simply have missed another cringe-worthy shot of the crazy hijinks Jackass is known for. I do need to put a warning out..you are going to see everybody’s junk. This one revolves around every different torturous way that a man’s anatomy can take. It’s R for a Reason!

There are extra scenes during, or after, the end credits of Jackass Forever. (What we mean by Anything Extra.)

Plot
After ten years, the Jackass crew is back for their final crusade.

chevron_left What is the Perfect Peetime?
Is there anything extra during the end credits of Jackass Forever? chevron_right