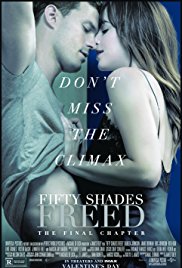 I’m not an old fan of the 50 Shades trilogy — in fact, this is the only movie in the series I watched. However, I can happily say I wasn’t lost at all, so first timers can pop in and enjoy it. It had a decent story, which I was not expecting, based on the big heavy “bondage” hype. [pullquote position=”right”]By this, I mean there is a real plot, and good characters, and some actual jeopardy to move things along.[/pullquote]

On another note, I think the entire cinema room was composed of women. There might have been one or two men, but the women were in full force, and clearly having a blast with their gal pals, giggling and chortling, getting into the spirit of things. Even during some sad/emotional scenes, they were laughing and cheering. I’m not sure I understood that, but at least they were having fun.