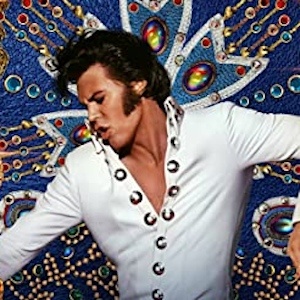 I’m going to keep this short because Steve T. wrote a nice in-depth review for this movie already.

Based on positive reviews I was expecting a really good movie. After seeing it I can say that overall I wasn’t impressed.

The acting was superb. Austin Butler did as good a job as can be expected portraying such an iconic person. (Note: I don’t know much about Elvis so my judgment here might not be the most reliable.) I’m very excited to see Butler next in Dune: Part Two as Feyd-Rautha Harkonnen. I expect he’ll knock it out of the park. It’s interesting that Butler’s two biggest roles are Elvis followed up by Feyd who was originally played by Sting.

It’s hard to recognize Tom Hanks magnificent acting because he plays such a despicable character. But make no mistake, Hanks makes Colonel Tom Parker a totally unlikable character. Props to Hanks for the willingness to take on a role like that.

The entire first half of the movie felt like one long montage. It barely slows down for a second. I feel that they tried to tell too much of a broad story. The movie would have been improved by editing out about 30 minutes of the first half of the movie and then add in a few slow character-building scenes. I think the best part of Elvis’ story is his discover and rise to stardom. More of that would have been more enjoyable.

The second half of the movie is filled with so much negativity that it’s hard to enjoy watching Elvis spiral. I certainly didn’t need to see that spread out over an hour+.

About The Peetimes: Elvis is over 2 1/2 hours long! I found 4 Peetimes. I recommend the 2nd and 3rd Peetimes. The 4th peetime is for Emergency use only because it’s short and involves building drama toward the finale.

There are no extra scenes during, or after, the end credits of Elvis. (What we mean by Anything Extra.)

Plot
From his childhood in Tupelo, Mississippi to his rise to stardom starting in Memphis, Tennessee and his conquering of Las Vegas, Nevada, Elvis Presley becomes the first rock ‘n roll star and changes the world with his music.

chevron_left Is there anything extra during the end credits of The Black Phone?
RunPee Weekly Newsletter #120 (June 29nd, 2022) chevron_right