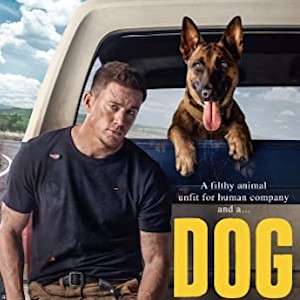 The movie Dog explores how war veterans, including dogs, struggle to cope with life after serving. Dog isn’t the feel-good comedy that the trailers make it out to be; at the same time, it’s not dark and depressing throughout. I would hazard to call Dog a gritty-real movie, but take that with a grain of salt because I’ve not served in the military.

One of the lines that really struck me was when Briggs (Channing Tatum) said to LuLu, “The Army has no place for liabilities, and that’s all you are now.” He says it to himself just as much as to LuLu. This isn’t a movie about a guy who feels victimized or is angry at the system. Briggs genuinely wants to contribute but needs to come to the realization that it’s time to step away and move on with his life.

I feel compelled to say: LuLu doesn’t die in the end. This movie isn’t going to crush your soul, although there were some very touching moments near the end that had me fighting back tears, but not really tears of sadness.

Is Dog a true story?

Dog is inspired by the real-life experiences of director and actor Channing Tatum, who plays Briggs. In real life, Tatum rescued Lulu (a Pitbull Catahoula mix-breed), from a dog pound in 2008. After living with him for ten years, Lulu passed away from cancer in December 2018. That is why the end credits end with: In loving memory of LuLu.

About The Peetimes: All of the Peetimes are good and don’t involve any character development.

There are extra scenes during, or after, the end credits of Dog. (What we mean by Anything Extra.)

Plot
Two former Army Rangers are paired against their will on the road trip of a lifetime. Army Ranger Briggs (Channing Tatum) and Lulu (a Belgian Malinois dog) buckle into a 1984 Ford Bronco and race down the Pacific Coast in hopes of making it to a fellow soldier’s funeral on time. Along the way, they’ll drive each other completely crazy, break a small handful of laws, narrowly evade death, and learn to let down their guards in order to have a fighting chance of finding happiness.

chevron_left RunPee Weekly Newsletter #101 (February 16th, 2022)
Is there anything extra during the end credits of Dog? chevron_right