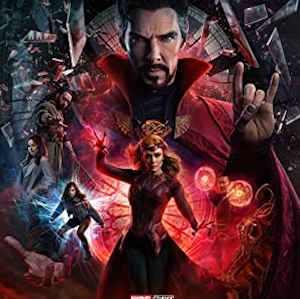 Oddly enough, I’m almost relieved that Dr. Strange in the Multiverse of Madness wasn’t another A+ MCU movie. My list of top third MCU movies is packed. Adding another to it means I have to pick an existing top third movie to drop. “Crazy”, I know.

Even though this wasn’t the best the MCU has to offer, it’s still at least as good as anything the DCU has put out there.

Where did Dr. Strange in the Multiverse of Madness go wrong?

Nowhere. The story was fine, performances were just right, action was good, character motivations worked for me. With only one exception—see spoilers below—there wasn’t anything that felt lacking. It was all good stuff. But not great stuff.

Unfortunately, expectations were sky-high for this movie, as they are for all MCU movies. In the RunPee app we have the Peeples Poll—it allows people to submit their expectation-rating for a movie before they watch the movie and then their final-rating afterward. After just one night, and a few hundred votes, DrStrange:MoM has an expectation of 8.25 and a final rating of 8.0. I queried the database and since 2020 only one other movie has had such grand expectations: Spider-Man: No Way Home, with an astounding expectation of 8.7, which it exceeded.

It will be interesting to see how the ratings evolve over the next few days. Obviously, the hard-core MCU fans are more likely to see the movie on an opening Thursday. Maybe the less hard-core fans will be more forgiving over the weekend. Time will tell.

The main takeaway is that DrStrange:MoM is a very good movie, just maybe not as good as we have come to expect from the MCU.

Sam Raimi, the director—who also directed Spider-Man 2002, Army of Darkness, Evil Dead, etc.—has a very distinctive style of filmography. He’s known for using unique camera angles, usually from the point of view of inanimate objects. I noticed his signature pov at the end of the movie when Dr. Strange is replacing the glass on his watch and we briefly see him from the viewpoint of the watch. That was a really subtle and creative viewpoint. I also noticed his style in a few shots when the point-of-view is seen through the frenetic viewpoint of the demons fighting Scarlett Witch.

Disclaimer: this is all very subjective. I have my thoughts and feelings on this matter and I’m not trying to convince anyone how they should think.

I love the addition of America Chavez. I think the MCU needs fresh young talent in order to continue to evolve the stories they want to tell. To me, it’s clear that Chavez represents the browning of America in media. Personally, I don’t care if this process turns off some fans. (You know who they are.) But at the same time, I don’t think the storytellers were trying to bludgeon the audience by representing America as a young Hispanic woman. To me, it felt incidentally-on purpose. It’s worth noting that America Chavez is technically an illegal alien in every country because she’s not from this universe.

I don’t know if Disney is driven by profits or their conscience on this topic, but it is clear that they are diversifying the cast to better reflect the changing demographics in the US. I do wonder how long Disney can walk the fine line between appealing to, what is political, two largely distinct groups.

My hope is that the stories Disney/MCU tells will help white conservatives identify with the ever-browning cast and realize that the character’s skin color is incidental. It’s the struggles and perseverance that matter to the character’s identity and growth. If white conservatives can learn to identify with what’s on the inside of a fictional character then maybe a pathway is opened for them to do the same thing with real people. Certainly, every bit counts.

As the MCU continues to add stories and new characters it’s inevitable that they will need to kill off some of the existing characters. Especially some of the uber-powerful ones. I think they gave a decent ending to Wanda/Scarlett Witch who eventually goes out on her own terms. But the moment lacked poignance. It’s Wanda from a different multiverse where she’s with her boys that has a short and tender moment with Scarlett Witch and tells her… Something. Honestly, I saw the movie twice and could not understand what Wanda said to Scarlett Witch before Scarlett Witch returns to her universe and destroys the Darkhold book and her thrown. I’m sure they intended for it to be profound, but boy did they miss on that pitch. And it sort of felt like the whole movie was set up for that moment.

About The Peetimes: I think the 1st and 3rd Peetimes are really good. Neither has any action or plot development. Note: the last movie trailer they showed before the movie was for the next Avatar movie.

There are extra scenes during, or after, the end credits of Doctor Strange in the Multiverse of Madness.

Plot
(Note: this is the plot according to IMDb and doesn’t have anything remotely to do with the actual story.) After the events of Avengers: Endgame, Dr. Stephen Strange continues his research on the Time Stone. But an old friend turned enemy seeks to destroy every sorcerer on Earth, messing with Strange’s plan, causing him to unleash unspeakable evil.