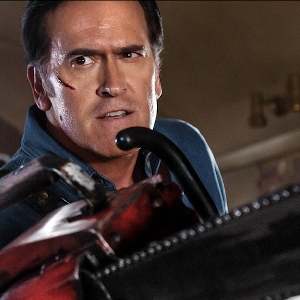 The mid-credits scene shows Doctor Strange walking down a street in New York City. He hears someone say, “Dr. Strange?” He turns to see a woman dressed in a purple superhero outfit (Charlize Theron) and says, “Can I help you?”

The woman says, “You caused an incursion, and we’re going to fix it.” She pulls out a blade that slices through reality to show the realm of Dormammu—who Dr. Strange fought at the end of the first Dr. Strange movie. “Unless you’re afraid,” she asks. Dr. Strange replies, “Not in the least,” as his third eye opens on his forehead.

The character played by Charlize Theron is Clea, Dormammu’s niece, and is also a love interest for Strange. (Wikipedia) In the comics, Clea and Strange defeat Dormammu, and eventually, Clea and Strange get married.

Who is that guy in the post-credit scene?

The guy punching himself due to Dr. Stranges’ spell is Bruce Campbell, a longtime friend of Sam Raimi, who directed Dr. Strange in the Multiverse of Madness.

Raimi and Campbell go way back to the late 1970s when Campbell appeared in Sam Raimi’s short film Within the Woods. Years later, in the early 1990s, Sam Raimi and his brother Ivan wrote and directed Evil Dead/Army of Darkness, in which Bruce Campbell played the main character. Bruce Campbell has long been a fan favorite and has voiced many games and animations, and had reoccurring roles as Autolycus, King of Thieves in Xena: Warrior Princess and Hercules.

Since then Sam Raimi habitually finds some small role for Bruce Campbell to play in each of his movies. Most famously Campbell was in the three Spider-Man movies with Tobey Maguire.

In the first Spider-Man movie, Campbell played the wrestling announcer who coined the name Spider-Man for the titular hero. Then in Spider-Man 2, Campbell returned as an usher. Finally, Campbell appeared in Spider-Man 3 as a waiter who tried to assist Peter Parker’s attempted proposal to Mary Jane. Always fun to see a Bruce cameo!

Movie Review – Doctor Strange in the Multiverse of Madness.