There are extras during the end credits of Doctor Strange in the Multiverse of Madness.

About 2 minutes into the credits is a very short extra scene that involves Dr. Strange.

The credits scroll for the next 7+ minutes, then there is another short extra scene after the end credits are over. It’s funny, and relates back to something from earlier in the movie, but doesn’t involve any future MCU story.

Movie review: Dr. Strange in the Multiverse of Magic. Grade: B- 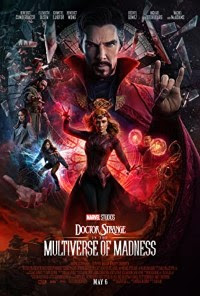 We have 3 Peetimes for Doctor Strange in the Multiverse of Madness. Learn more.

About The Peetimes
We are very fortunate that Shanee Edwards, movie reviewer/writer in Los Angeles, has agreed to get Peetimes for this movie during a screener Wednesday night.

We know how important this movie is, so we’re going to do our best on the Peetimes. I’ll be at the 3:00 PM opening so I can edit/revise the Peetimes as needed and then I’m going again with my wife Vera to the movie at 6:30 PM so she can offer her feedback on the Peetime choices.

Plot
After the events of Avengers: Endgame, Dr. Stephen Strange continues his research on the Time Stone. But an old friend turned enemy seeks to destroy every sorcerer on Earth, messing with Strange’s plan, causing him to unleash an unspeakable evil