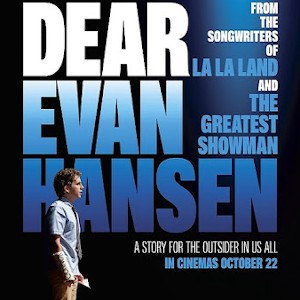 Dear Evan Hansen was an incredibly well-done movie. The message that it contains hits home so hard that you’ll walk out of the theater a lot heavier than when you walked in. The ongoing issue with mental health has finally been given the attention it deserves.

Plot (Spoilers)
Film adaptation of the Tony and Grammy Award-winning musical by Steven Levenson, Benj Pasek, and Justin Paul about Evan Hansen, a high school senior with a severe Social Anxiety disorder, whose letter to himself, one that was not meant to be seen by others, lands into the wrong hands of a fellow classmate who, as a result, commits suicide. This incident sends Evan on a journey of self-discovery and gives him the chance to finally be accepted by his peers and live the life he never dreamed he could have.

Ben Platt was simply amazing. He was able to capture the role so well that just watching his facial expressions would bring you to tears. Then you hear him explain what is inside him, his thoughts, fears, and anxieties. It was a work of art.


I’m extremely happy that there is a movie for people to watch and live inside of a troubled mind for a while. Perhaps after watching this movie people may be more aware of those who surround them. Does someone need help but isn’t reaching out? Society needs to reach out and help their fellow humans instead of bringing them down.

The movie is depressing because it’s real. The message is important. I hope that you can see this movie and come out a little, no, a lot more compassionate and more aware. Let’s not let the quiet ones slip through the cracks. Reach out and listen. You could save a life with your kind words and a listening ear.

About The Peetimes: This was not a “Peetime friendly movie.” I feel that there were no good choices. I lean towards the 1st Peetime. There is no dialog which makes for an easy summary. The 2nd Peetime has a lot of dialog that I was able to sum up but only stuck it there for an emergency.

There are no extra scenes during, or after, the end credits of Dear Evan Hansen. (What we mean by Anything Extra.)

chevron_left RunPee Weekly Newsletter #80 (September 22nd, 2021)
Is there anything extra during the end credits of Dear Evan Hansen? chevron_right