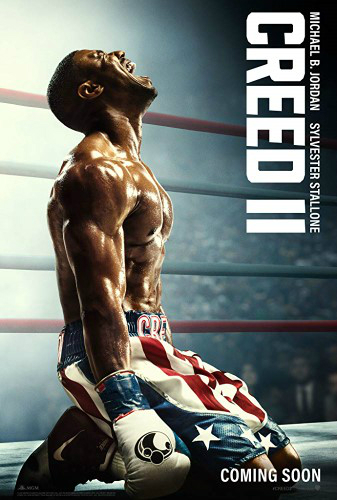 This movie was similar to the Rocky movies, but is trying to become its own thing. We can see that in the scenes when Rocky doesn’t stand in the spotlight with Adonis. I think that’s a good indicator that the directors and writers are trying to make a separation between this second generation and the parent movies of Rocky.

I think what makes a Rocky movie so memorable has a lot to do with what’s happening outside of the boxing storyline. From the proposal, to the pregnancy, to the early fatherhood challenges, I think this movie had a lot of moments that touched the hearts of the audience.


I think the part about Creed II that I had never seen in a previous Rocky movie was the portrayal of the opponent, which in this case was Viktor and Ivan Drago. The movie starts out with scenes of them, instead of scenes of Adonis and Rocky. I think throughout the movie there were very important scenes of Viktor and Ivan that help the audience understand what this fight meant to them. For me, it made me feel compassion for Viktor and Ivan Drago. For Ivan, this fight was his way of redeeming himself from the defeat against Rocky.

In this movie, we see that there was a lot of fall out due to that loss. Ivan experienced separation from his country, his wife, and all those who supported him before he lost against Rocky. It seems that Viktor was raised with a singular goal in mind–redeem the honor of his father and win back his mother into their lives. I truly did feel for Ivan Drago because this fight was more about him than it was about Viktor. Viktor had no personal motivations for this fight except those of his father. I think the reason this movie decided to show empathy towards Viktor and Ivan is because they are not the real antagonists of the film. The real antagonist of the film is Viktor’s mother and Ivan’s former wife. Towards the end of the movie, Ivan decides that the life of his son is more important than the support of his country.

Overall this was a great movie; I like the alternative views it had and I’m excited to see what’s in store for Adonis Creed in the future. I’m also interested to see what is in store several years down the line for his daughter–Amara Creed. I think people believe she won’t be a boxer due to being born deaf, but based on the scene with her watching Adonis return to the boxing gym, I don’t believe that will stop her.

Overall: I think, as usual, both the acting of Michael B. Jordan and Sylvester Stallone were great. I would recommend this movie to anyone. I’m a true Rocky convert. It’s worth it to see it in theaters.

About The Peetimes: It was easy to find 4 good Peetimes that didn’t interfere with the great boxing scenes or the relevant story line.

There are no extra scenes during, or after, the end credits of Creed II. (What we mean by Anything Extra.)

Watching movies in theaters is an indescribable experience for me. This, doing laundry, and visiting the Container Store bring me true joy. When I’m not watching movies or getting Peetimes, I like keeping up with the latest technology, learning to code, and building things. Career wise, my passion lies with improving access and equity within the health, tech, and social sectors.