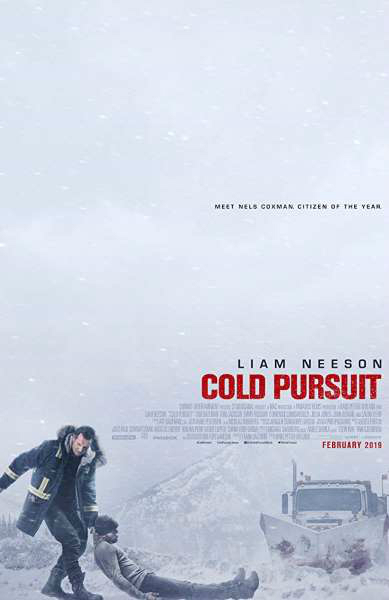 If you like the Coen Brothers, you’ll love Cold Pursuit. This movie runs circles around Liam’s other ‘particular set of skills’ flicks. The well-placed humor that you usually see in the Coen films is refreshing, and sometimes really funny.

Sure, we get plenty of head banging “shooting at point blank range” bloody snow scenes to satisfy our lust for the ‘I’m going to kill you now’ version of  Liam Neeson. However, Snow Plow Neeson is a kinder, more gentle killer who, at times, actually got very tired when beating the life out of someone.

However, Neeson’s interaction with Ryan — the young son of a drug kingpin — sets this movie apart from his other ‘I’m going to kill you now’ work. Watching the two characters interact added another layer to the movie, allowing a rest of sorts between more typical scenes of inept drug lords killing each other.

The cinematography was beautiful, and even though you know it was probably 10 below, you still wanted to be there. Filming this movie for the actors was most likely a nightmare, unless of course the snow was CGI.

I wholeheartedly recommend Cold Pursuit to all fans of Liam Neeson, and even if you’re not a fan now, you’ll be one after seeing this movie.

About The Peetimes: This movie had a lot of twists and turns and shootouts making it a little difficult to get 3-4 minutes of down time. The 2 Peetimes are fairly far apart so keep that in mind as the first Peetime approaches.

There are no extra scenes during, or after, the end credits of Cold Pursuit. (What we mean by Anything Extra.)