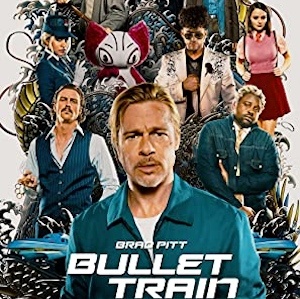 The best thing about this movie is the humor. The audience laughed countless times. The story is creative. It’s a rare action/mystery movie. Believe me, a lot happens early in the movie that doesn’t always mean what you think it means, like in a mystery movie. So try to pay close attention to details.

The fight/action scenes aren’t anything spectacular, but the scenes are filmed in creative ways. I really like that the fight scenes also involve action. It isn’t like a boring action movie where the characters stop talking as soon as a fight begins. In this movie the dialog continues all through the fight which provides some of the best humor in the movie.


The movie breaks the 4th wall a few times in really fun ways. Speaking of which, there are also some hilarious cameos.

If I have one negative critique it’s that there are a lot of people with accents in the movie and sometimes it’s hard to understand what they say. I was totally lost in some of the lines between the brothers. I guess I just need more exposure to the British accent. (Hmmm, since it’s my job to write movie reviews then maybe I can make a trip to the UK completely tax deductible?!?!?!)

About The Peetimes: I always say, “Mysteries are the hardest movies to do Peetimes for.” While Bullet Train doesn’t look like a mystery, it kind of is. I really think the 1st Peetime is the best. It’s one long scene that is easy to summarize. The other Peetimes have numerous scenes in them.

There are extra scenes during, or after, the end credits of Bullet Train.

Plot
Trained killer Ladybug wants to give up the life but is pulled back in by his handler Maria Beetle in order to collect a briefcase on a bullet train heading from Tokyo to Morioka. On board are fellow assasins Kimura, the Prince, Tangerine, and Lemon. Once on board the five assassins discover that their objectives are all connected.

chevron_left Wakanda Forever – What You Need To Know About Black Panther 2
Is there anything extra during the end credits of Bullet Train? chevron_right