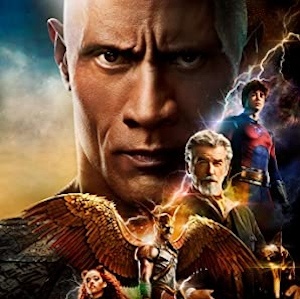 The good news is that I think everyone who wants to see this movie just wants to see Dwayne Johnson be a badass superhero. On that note, I can give this movie a big thumbs up. The Rock nailed the anti-hero Black Adam. He was perfect for the role. His delivery and expressions were spot on every time. If it weren’t for The Rock I would have dropped this movie down in the D- range.

Unfortunately, there’s the rest of the movie.

Has any DC movie had a decent villain? I don’t recall one. I’m not saying that it’s easy to create a great villain, because it isn’t. Creating a good villain is one of the hardest things to do in storytelling, but it doesn’t even seem that DC is even trying. They always seem to be evil for evil’s sake, power-hungry just because, whatever. The villain in this movie isn’t remotely sympathetic. He just wants power for lame reasons.

Who are these people?

OMG, this movie should have been at least the sixth movie in a series. We get practically zero backstory on all of the characters who aren’t Black Adam. They make it clear that these characters have existed in the DC-Universe the whole time. So… Where have they been? Do we not get their backstory? These are some powerful characters who have existing relationships that we just have to gleam from a few lines here and there. It feels like Dr. Fate and Hawkman should have at least two or three movies together. It’s bewildering how poorly the DCU is being managed. Someone has to be sabotaging it from the inside. There’s no other explanation for how they could continue to make disappointing movies and leave gobs of stories untold.

I really want to see Dr. Fate’s origin story, and then a few movies of him and Hawkman teaming up. And let’s see Cyclon’s origin story. That sounds suitably dark.

What did he say?

There were far too many dialog scenes with background music or noise that made it hard or impossible to make out what the characters were saying. How could no one notice that during post-production? This seems to be happening more and more frequently. I know I’ve mentioned this before in other movie reviews.

About The Peetimes: I have three good Peetimes. I think the middle one is the best. It’s an action/chase scene, but you won’t miss anything special or any humor.

There are extra scenes during, or after, the end credits of Black Adam.

Plot
Nearly 5,000 years after he was bestowed with the almighty powers of the Egyptian gods-and imprisoned just as quickly-Black Adam (Johnson) is freed from his earthly tomb, ready to unleash his unique form of justice on the modern world.

chevron_left Is there anything extra during the end credits of Black Adam?
Movie Review – Ticket to Paradise chevron_right