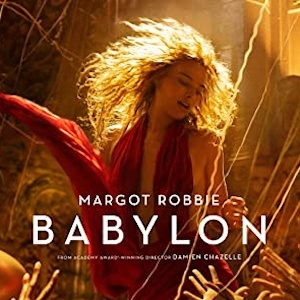 Babylon, wow. WTF did I just see? It was a movie full of sensory overload, doubled-up debauchery, glitz, glamour and so much more. IMDB explained it as, “A tale of outsized ambition and outrageous excess, it traces the rise and fall of multiple characters during an era of unbridled decadence and depravity in early Hollywood.” Another way to put it that rings true is, “A depiction of early Hollywood, unhinged and full of mayhem.”

So the emotion behind this movie is undeniable. It was genuinely unsettling and thought-provoking. Last night I was so overloaded that I needed to think about it overnight. As I lay in bed it hit me that this was the era that my great-grandmother lived. I would be scandalized if she behaved the way they portrayed life back then. I think about her sitting by a fire knitting a blanket while she watched over the children, making dinner, and reading the kids to sleep. I can guarantee you small-town Oklahoma life was nothing like Hollywood. None of her stories came close to being as exciting as even the tamest scene of Babylon.


The acting was phenomenal. Brad Pitt and Margot Robbie were magnificent, both gave life to their characters in such a fashion that I felt their emotions. I felt their happiness, excitement, turmoil, and passion for the roles they played. It was truly a work of art. I hope some awards come their way, it’s definitely deserved.

I had one complaint and that was the length. It did feel a bit long but the more I thought about it, I couldn’t find scenes that could have been left out. It needed the length to produce the end result, which was pure perfection. Bravo Hollywood!

About The Peetimes: I found 4 Peetimes that should work well for any emergency needs. They are spaced throughout the 3-hour runtime.

There are no extra scenes during, or after, the end credits of Babylon.

Plot
A tale of outsized ambition and outrageous excess, it traces the rise and fall of multiple characters during an era of unbridled decadence and depravity in early Hollywood.

chevron_left The Best Screenplays Of Books In The 21st Century That Are Popular Among Students
Is there anything extra during the end credits of Babylon? chevron_right