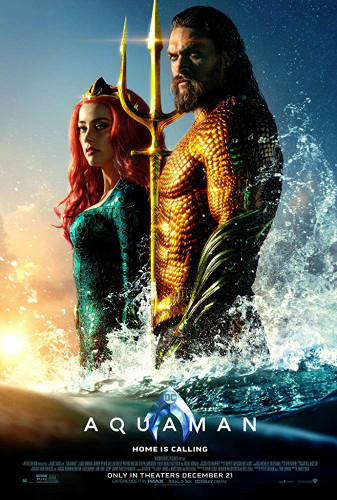 What does DC have to do to shake off the feeling that it’s the poor man’s Marvel?

I’m not saying Aquaman is bad. Far from it. It’s a decent movie despite being as predictable as it is visually appealing. But it’s no better than the first Thor movie. Which would be fine if Aquaman came out a decade ago. Unfortunately, Marvel beat them to the punch. DC is trying to find their feet while Marvel is breaking Olympic records.

Here’s my best guess why Aquaman doesn’t soar: it just doesn’t know what it wants to be. It’s an origin story for sure, but not much of one. For such a long movie, the origin of Aquaman only comes up in a few brief flashbacks and only one of them — when he’s a young boy — really works.

There’s a little romance, which is fine, but the timing of the scenes are completely wrong.

Then there’s a few scenes that feel like they were stolen from a National Treasure sequel.

The worst part of all of this is the inclusion of Black Manta. I don’t know why the writers felt compelled to throw this character into the story, because it only drags the plot beneath the waves.

All of this happens in the middle third of the movie, robbing the plot of any real dramatic weight when it needs it the most.

It looks like the creative decision makers behind the DC movies heard the criticism about their previous movies being too dark, and decided to “lighten things up a bit.” All I can say is it’s just not that easy. The audience needs a feeling of impending doom so the story grabs them, but there’s also a time and place for the distractions that make a story memorable.

That’s why DC movies are like a mixed salad of moments while Marvel serves a complex meal, where each serving is meant to compliment the others.

About The Peetimes: We have 4 good Peetimes. We recommend the 2nd and 3rd over the others. The 2nd Peetime is a chase scene — pretty — but nothing you haven’t seen in previous scenes. The 3rd is mostly a music montage, followed by a transitional plot that’s easy to summarize.

There are extra scenes during, or after, the end credits of Aquaman. (What we mean by Anything Extra.)