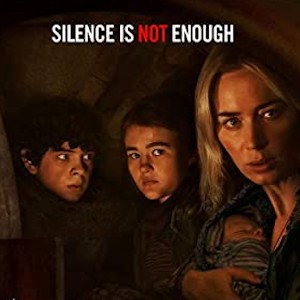 A Quiet Place 2 is like a delicious sauce left to simmer until only the essentials remain; at under 90 minutes runtime, not counting the end credits, it walks the fine line between not one scene feeling rushed, nor one that drags on longer than necessary. It is a masterful work of storytelling.

Plot (Spoilers)
Following the events at home, the Abbott family now face the terrors of the outside world. Forced to venture into the unknown, they realize the creatures that hunt by sound are not the only threats lurking beyond the sand path.

If there’s anything about this movie that’s better than the story it’s the acting. Emily Blunt is as good an actress as there is, yet she was upstaged by the two actors who play her kids. They were both amazing and delivered nuanced performances. Likewise, Cillian Murphy was splendid, as always.


I just recently added the option to grade a movie with an A++. I informed the Peeps here at RunPee that they could use it, at most, once a year. And there are no takebacks. I’m committed to saying that this movie is the best movie I’ll see for the next 12 months. What pushed it over the top for me was the ending, which, without giving anything away, is inspiring. I feel that an A++ movie has to hit all the story, production, and acting marks perfectly, and also be inspirational. A movie that you tell people they need to see, like this one. Especially if they have adolescent children. Because this movie isn’t just about overcoming an alien invasion — it’s about overcoming our own weaknesses.

About The Peetimes: I have 3 good Peetimes for you to choose from. I would recommend the 2nd Peetime as the best to use. I’ll be honest — the cues for the Peetimes are really hard to use because there’s almost no dialog to go by. If you’re not using the Timer then you’ll have to pay very close attention to notice the cues.

There are no extra scenes during, or after, the end credits of A Quiet Place Part II. (What we mean by Anything Extra.)

chevron_left RunPee Weekly Newsletter #63 (May 26th, 2021)
Is there anything extra during the end credits of A Quiet Place Part II? chevron_right