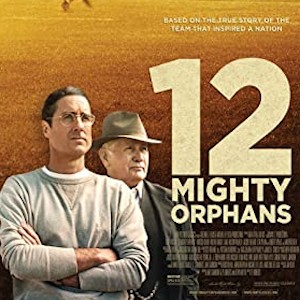 The release of 12 Mighty Orphans is perfectly timed for football fans out there clamoring for their football fix. Football news might encircle the calendar these days, but that only teases the appetite until games begin in the fall.

Plot (Spoilers)
Haunted by his mysterious past, a devoted high school football coach leads a scrawny team of orphans to the state championship during the Great Depression, inspiring a broken nation along the way.

Make no mistake, 12 Mighty Orphans is first and foremost an inspirational story, but there is just enough football history thrown in to make it compelling. Coach Rusty Russell is credited as the Father of the Spread Offense that helped his teams of smaller boys compete against larger teams. Adding that element helps elevate the inspirational storyline. At the beginning of the movie, Coach Russell talks about evolution and natural selection to the boys and then puts those principles to work by reimagining how an offense can function.


The story goes a little off the rails by creating two overly exaggerated villains that really don’t contribute anything meaningful. The boys already have enough obstacles; compounding them with artificially inflated maliciousness doesn’t make the movie more compelling. The time spent building villains could have been better used fleshing out the characters of the teammates who don’t get a speaking role. As the movie went on it became painfully obvious that the two Latino players didn’t utter a word of dialog. At least none that I noticed.

When 12 Mighty Orphans begins, we see “Inspired by true events” on the screen. That might be one of the most factual statements in the movie because just seconds later we see that the movie begins in 1938, with Coach Rusty Russell arriving at the orphanage. But that’s about 11 years later than the truth. The movie compresses about 11 years of history into just one season. And that’s totally understandable because the movie is really about the boys and not just the coach. By compressing the story they have continuity with just one team of players.

As mentioned earlier, it’s true that Rusty Russell is credited as the father of the spread offense. He also co-authored the American Football Coaches Association (AFCA) Code of Ethics in 1952 along with fellow coaches William D. Murray, Lloyd Jordan, and Bud Wilkinson. Russell held various head coaching positions in his career. His record as a high school head coach over 23 seasons, was 181 wins, 40 losses, and 14 ties (82% winning percentage), His overall record as a head coach in 23 years as high school and 13 years as college head coach is 250-100-21 (71% win percentage).

There would have been inspiration to inspire another movie — had a coin-toss gone the other way. In 1942, he actually coached at both Masonic Home in Fort Worth, Texas, and at Highland Park High 35 Miles away in Dallas. He arranged to coach on alternate days and had the games arranged on Fridays and Saturdays so they would not conflict. Masonic Home was a coin toss away from playing Highland Park in the 1942 playoffs.

In his 16 years at Masonic Home, Rusty Russell went to the State playoffs 10 times. Building a football program from scratch, Russell guided the Masonic Home’s ‘Mighty Mites‘ to a tie in the 1932 state championship game.

About The Peetimes: I have three Peetimes that are spaced out nicely throughout the movie. I wouldn’t say one is better than the other so just use the one your bladder picks.

There are extra scenes during, or after, the end credits of 12 Mighty Orphans. (What we mean by Anything Extra.)

chevron_left Children’s Book Review – The Acorn People (1976)
Is there anything extra during the end credits of 12 Mighty Orphans? chevron_right