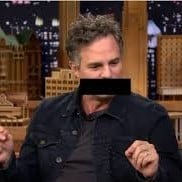 Mark Ruffalo, as Marvel’s Hulk, talks a lot — unlike the Hulk, actually. Ruffalo’s been known to accidentally drop many a spoiler on talk shows, followed by an “ooops” face, and usually an unsuccessful attempt to pass it off as a joke. It seems he just did it again, live with Jimmy Fallon. Maybe.


In the video, Ruffalo’s words are bleeped and blocked out, but fans pieced together what’s he’s saying anyway, and it seems to be “The Last Avenger”.  If true, it makes a nice bookend with Captain America: The First Avenger, especially with Chris Evans announcing he will be hanging up Cap’s mantle in Avengers 4.

This may or may not be the name of the movie, as the entertainment world is pretty aware of Ruffalo’s spoilerey reputation: the whole thing could just be a pre-planned joke on the audience, intended only for laughs.

Of course, Ruffalo isn’t the most loose-lipped member of the Marvel Cinematic Universe. He shares that special spot with young Tom Holland (Spiderman), in a little video moment I wrote about here.

Here’s the Ruffalo segment on Fallon’s show. Do you think this is a legit spoiler, or a playful set-up? (Clearly the ending is meant as great fun…)

mark is really out here spoiling everything pic.twitter.com/9Z3gjt4hzk