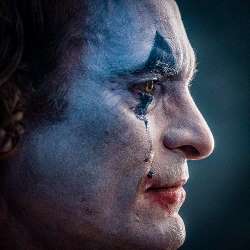 The Joker (played by Joaquin Phoenix), is a standalone origin story, set in 1981 Gotham City, which tells the story of how the character Arthur Fleck , a failed stand-up comedian, turns to a life of crime and chaos.

The Joker is the first in a series of movies and comics DC is launching under the DC Black heading. DC Black stories are a bold new approach to let storytellers experiment with characters without being beholden to the continuity of the larger DCEU (DC Extended Universe). The idea is to create a series of standalone movies — one-offs, so to speak — that don’t relate to any other DC movies.

Basically, DC has given up trying to compete with the success of the MCU (Marvel Cinematic Universe) and are going back to what they do best: tell dark stories about dark characters in dark places.


Ironically, the MCU is also experimenting with this form of storytelling, outside the bounds of continuity with the main MCU story-line, in their “What If…?” series, where they transpose different characters into different roles: such as “What if Black Panther was Starlord?” …or explore how things could have been different if a character had made a different decision. Like what if Steve Rodgers hadn’t become Captain America?

Disney Plus is working on this concept, but Marvel is still leaps and bounds above anything the DC has offered lately. We’ll see if this idea helps level the playing field.