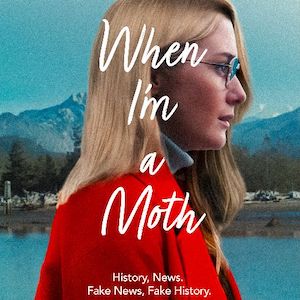 I was quite looking forward to When I’m A Moth for a number of reasons. Last October I reviewed a film called The Wall Of Mexico — which I enjoyed — and when the preview invite for When I’m A Moth popped up, some of the names rang a bell. Those names were Zachary Cotler and Magdalena Zyzak…both films were written by Mr. Cotler and jointly directed by him and Ms. Zyzak.


As a result, I was expecting something with more than mere hints of political philosophy, social awareness, and possibly a wry smile or two.

The other reason I pushed When I’m A Moth up the viewing schedule was the subject; it is said to be an “un-biopic” of Hillary Rodham-Clinton — about whom I have a certain amount of respect. I can’t claim to know vast amounts about American politics, but I do know that, if I were eligible, I’d probably exercise my franchise on the behalf of the Centre-Right — or Democrats as they’re known. Ideally, I’d vote for someone of a more Left Wing/Socialist demeanor but that’s, pretty much, unheard of over there.

Fear Is Always With Us, But We Just Don’t Have Time For It

So, is When I’m A Moth actually about H R-C? It is set in 1969 in Valdez, Alaska. It features a woman in her early twenties who is experiencing life by travelling across Alaska and supporting herself with menial jobs; in this case, a fish gutter in a processing plant until she gets sacked, and the woman gives her name as Hilary from Chicago…it is only towards the end when she signs a letter that we see that it is spelt “Hillary”; one of the Japanese men asks her surname but she doesn’t give it.

A quick look at her Wikipedia page shows that, indeed, the then Ms. Rodham did travel across Alaska in the summer of 1969 between graduating from Wellesley College and starting at Yale Law School. She did also get sacked from a fish cannery before she got it closed down on health violations.

Obviously, there are aspects of the story that could point to this being the first dramatic portrayal of Hillary Clinton; Susan Stanton (Emma Thompson) in Primary Colors was, allegedly, based on her.

When I’m A Moth shows a young woman developing her political ideals and philosophies, mainly through a series of conversations with a Japanese man and his uncle. The fact is that the ideologies she arrives at are not a million miles away from those which you could imagine a young Hillary holding.

Ultimately it is irrelevant whether When I’m A Moth is a biopic, an un-biopic, a pseudo-biopic, or quasi-biographical. What is important is the presentation of the ideas. At one stage the Japanese men claim that one of them comes from Nagasaki and the other from Hiroshima. This is probably to unsettle Hillary as the film is set about twenty-five years after the dropping of the atomic bombs, and those events would still be raw to a young person of her political allegiances at that time.

Do All The Good You Can, For All The People You Can, In All The Ways You Can

So was I glad I’d noticed the names of the writer and directors and pushed up my viewing of When I’m A Moth? In short, yes.

If you remember I said I noticed it because I remembered The Wall Of Mexico — so how did it compare? To be honest, it’s a bit like comparing apples and oranges. In the way that both of those are fruit, so both films have political aspirations and express them eloquently. They are both well written, and I shall be looking out for whatever Zachary Cotler writes next and I’ll keep more than half an eye on Magdalena Zyzak’s career.

Beyond that, though, they are very different. The Wall Of Mexico was bright and colourful throughout, whereas When I’m A Moth is shot with a darker and flatter palette. I don’t want to read too much into things but the brightness reflected the sunshine of Mexico, while the dull greys and blues just shouted Alaska and midnight daylight.

Another difference is the cast. While The Wall Of Mexico had a cast of dozens, if not thousands. When I’m A Moth was, essentially, a triple-hander; Addison Timlin is wonderful as Hillary, TJ Kayama is delightful as Ryohei, and Toshiji Takeshima is explosive as Mitsuru, the uncle. No famous cameos this time but that was, I’m sure, more down to the lack of need from the story rather than lack of acceptance from anyone approached.