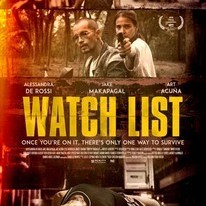 Well, that was grim! But, at the same time, fascinating.

I’m not sure whether or not it helped, but this was my first venture into the cinema of the Philippines.  As a result, I didn’t know if the main characters were seasoned actors or enthusiastic amateurs just reliving their everyday lives in front of the cameras. It turns out that they are the former. Alessandra De Rossi has 99 acting credits listed on IMDb!

This film was definitely not in the ‘light entertainment’ category; it was a hard watch, but a compelling one. It’s a grittily realistic portrayal of life in the slums of an unnamed Filipino town. It seems that half the population has resorted to drugs to either blot out the pain of everyday life, or to try and make ends meet; the dealers here aren’t multimillionaires whose main worry is whether their albino tigers might scratch their Ferraris, but people struggling to survive on the money from the two legitimate jobs they already have.


Then the politicians and the police start to “tackle” the drug problem by pressganging anyone who has had a finger pointed at them, as being a user or dealer, to sign up to the Surrender Program where they vow to get and stay clean. However, the lists are used by the police and a group of vigilantes to carry out extrajudicial killings, which mistakenly sweeps up Maria’s (De Rossi) husband and leaves him dead on the street.

This then leads Maria to desperate lengths to fend for her young family.

So begins Maria’s descent into a dark nether world where you’re never 100% sure who the good guys are right up until the tragic end. Be warned, this is not a feel good film that has you watching the credits with a smile and a song in your heart. It is a very-well made, well-shot, and incredibly well-acted piece that leaves you thinking how accurate it is, and worrying that it is more than you’d want it to be.

It’s hard to grade because it deserves an A, but some people would find it too distressing to watch and it is hard to describe as mere entertainment. Best just settle on a B for it, I think.