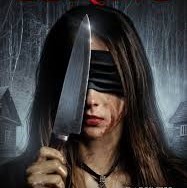 When I saw “The Luring” I thought it looked quite interesting and would make a change from the other low budget offerings I get to see. What usually happens is I get sent an email with the poster and trailer, and then I decide whether or not I want a screener so I can review the film; to be honest, my standards are fairly laughable, because I never say no. Sadly, “The Luring” did not live up to expectations.

I was expecting a subtle, slow burn of a psychological thriller. What it delivered was more of a homage to various other films… I say ‘homage’ because ‘breach of copyright’ can sometimes cause offence.

“The Luring” features the red balloon from “It”, the descent into madness from “The Shining”, and the weird child from, well, pick any from “The Omen”, “The Orphanage”, “The Babdook”,”Insidious”, and any number of other examples of the genre.


I’m trying to think of nice things to say about this movie, and can’t…

Rick Irwin and Michaela Sprague were just about watchable as Garrett and Claire, but never really strayed into believable; the switch from “lovey-dovey” to “you’re driving me mad, you soul sucking witch” is a bit abrupt, and brought about by the flimsiest of reasons.

Then there are the bits at the beginning and end which just seemed to be tagged on. OK, the opening sequence does introduce the creepy estate agent who crops up throughout the film, but it’s nearly ten minutes of nothing of any value that just seems to be there to the running time up to an hour and a half. Throw in the last five minutes or so which seem to be saying, “despite the resolution shown in the last scene this stuff is going to carry on,” but it doesn’t follow the established theme, just throwing in some random nastiness… and something which has to be the most bizarre attempt to introduce a numerology conspiracy that I’ve ever seen.

chevron_left Is there anything extra during the end credits of Honest Thief?
Movie Review – Honest Thief chevron_right