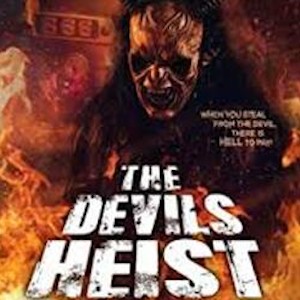 I have a confession to make:  I love the Devil.  Okay, not the real Devil.  But I love the way actors portray him in film.  Whether it’s James Woods in Disney’s Hercules or Peter Stormare in Constantine or Tim Curry in Legend, I’m a sucker for a smooth portrayal of Satan.  Ever since Milton wrote Paradise Lost, the Devil has gotten all the best lines.  So when I was offered the chance to review The Devil’s Heist, my answer was an enthusiastic yes.  The fact that it’s a crime caper was just icing on the cake.

What’s good about The Devil’s Heist

The Devil’s Heist has the best premise of any movie I’ve reviewed this year:  Three criminals unknowingly steal from the Devil and have to pay the price.  The bank where the Devil keeps his money is run by a coven of witches.  I love this story concept.  It’s simple.  It’s fun.  It’s creepy.


Mike Ferguson makes a great Devil.  He has an evil laugh.  He’s believable.  He has a strong screen presence.  He’s a big, angry guy with tattoos.  Ferguson obviously enjoys playing the part.

Cirenia Guerrero is sexy and fun as a brothel owner.  She deserved a bigger role.

What’s disappointing about The Devil’s Heist

His character is fun at first.  From his harsh words to the prison guard who releases him, and the brief moments of voice over, it’s obvious Sapphire can be funny.  On his IMDB page, there are videos of him juggling that show how engaging he can be.  (Go ahead.  Check them out.  I’ll wait.)  Ultimately, though, the script doesn’t give him enough to work with.  His character is angry for the whole film.  While Sapphire does anger well, he needs better dialogue to support him.  Instead, he’s left with a vocabulary full of expletives and little else.  It’s a testament to his charm that I ended up liking his character more than I should have.

There’s not enough of the Devil.  As good of a villain as Ferguson makes, he’s not given enough to do in the film.  He shines in the few brief scenes that he has.  But he should have been a bigger part of the plot.  His dialogue is also lacking.  When you see a Satan this good, you want him to have witty things to say.

The monsters don’t come in until halfway through the movie.  They aren’t explained well and they don’t do much.

We don’t get to visit Hell.  An early scene of the Devil torturing someone makes it look like they’re in the underworld.  Sadly, they’re not.  I was looking forward to a scary vision of Hell, especially the one that this particular version of the Devil would inhabit.

There are characters that are underused.  The main one is Lilith.  At the beginning of the film, she antagonizes the Devil by killing the women he’s in bed with.  Then she’s never seen again.  She would have made a great character.  She’s as powerful as the antagonist and is the only character in the movie who is able to make things difficult for him.  It would have been cool if she helped the bank robbers out of spite.

Final thoughts on The Devil’s Heist