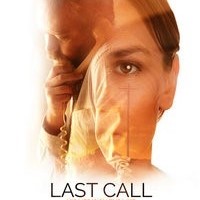 I wasn’t 100% sure what to expect from Last Call. When the tag line on the poster is pushing the fact that it’s “real time, split screen, one single take,” then you do tend to wonder, “Is that it? Nothing else?” It’s a bit like if a car advert just concentrated on the number of cup holders, rather than mentioning the size of the engine or the number of seats.

Also, there was all that buzz around 1917 being a single take film, which was disproven by the simple act of watching it. There needs to be something more than a technical twist: Gadsby needed something more than just having 50,000 words, none of which contain the letter ’E’! Well… if you want people to get to the end of it.

So what happens in Last Call?

This is the story of a bitterly alone man Scott, played by Daved Wilkins who — on a significant anniversary — calls the Suicide Prevention Hotline, but accidentally gets through to Beth, a janitor played by Sarah Booth.


In one half of the screen you have Beth, on her way to her night job of cleaning the offices of a career advisory centre. Even before she can get out of the car, she finds out that her twelve year old son hasn’t arrived back home, so that’s something playing on her mind.

In the other half, there is Scott — sitting in a bar as it’s closing, buying a bottle of something strong, and heading home. When he gets home he starts making phone calls; he gets a couple of answering machines.

Then a call to a number he found on a bus gets him connected to Beth.

The rest of the film is the phone call between Beth and Scott as they talk about their situations, their problems, and their attempts to help each other. It soon becomes a case of Beth doing her best to help Scott with his alcohol-fueled desperation.

Does it work? Yes! Both dramatically and technically

It is a gripping story, is excellently played by the two leads. (My only quibble is that Sarah Booth seems too young to have a nearly teenage son!) They both play their parts perfectly. The growing concern as Beth realizes the depth of Scott’s despair is palpable, and a very drunk man in a flat with a balcony manages to keep the tension ramped up.

And where 1917’s claim to one-shottedness is sunk by the locations being spread all over England, and real time is spoilt by an instantaneous transition from day to night, while the hero is unconscious, Last Call is, actually, one long take by two camera crews working simultaneously in different parts of Windsor, Ontario.

The conversation actually takes place over the phone. Even the soundtrack was performed live to the film in one take by a string quartet.

All in all, a marvellous piece of Canadian filmmaking.

chevron_left Is there anything extra during the end credits of Let Him Go?
Indie Movie Review – All Joking Aside chevron_right