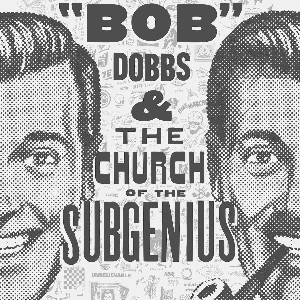 First glance at J.R. ‘Bob’ Dobbs and the Church of the SubGenius and I thought I was in for a satirical comedy at the expense of the multifarious religious groups that proliferate in the USA.

Then I thought it was going to be a documentary about one of those weird denominations and its congregation.

Turns out that J.R. ‘Bob’ Dobbs and the Church of the SubGenius is somewhere in between… a documentary about a group of like-minded people who got together to create a bit of havoc, have a few laughs, poke fun at the establishment, and, for the sake of needing to call themselves something, formed a “church”.


Now this may be another case of me looking across at the States and wondering, “what on Earth are they up to” while native Americans (the ones born and raised there, rather than the indigenous ones) will just think “oh, yes… them,” and just carry on with whatever they’re doing because, prior to the info for this film landing in my inbox, I’d never heard of either J.R. ‘Bob’ Dobbs or the Church of the SubGenius. If pushed, I’d probably say that I recognised the pipe smoking, smiling, ever so ‘50s man who they rescued from the lost world of early Clipart back when it came on sheets of paper and had to be clipped out and stuck down. I may have recognised the smiley chap, but I had no idea of the significance of him.

Seriously, what IS this film?

So, for the benefit of other people like me who’ve never heard of them, the Church of the SubGenius is the creation of Ivan Stang and Philo Drummond, with Dr. X, during the late ‘70s; incidentally… they are (surprise, surprise!) all pseudonyms.

They produced a pamphlet, which was a lampoon of established churches — particularly Scientology — announcing the impending end of the world and the possible deaths of its readers, and criticized the usual concepts of gods, saviors and spirituality. Throw in an anarchic sense of fun, like Mad Magazine on PCP, and it is something that gathered a fair few followers. And, so I found out, still is at a cost of $35 per head to become a church minister.

If I’m honest, it’s the sort of thing I may have got involved with if I had grown up in the USA rather than the UK

The thing is though, that it would never happen over here, because there is little in the way of ‘specialist’ denominations to satirize. Here we have the Church of England, which is what the majority of people over here would say they were if pushed, followed by the Roman Catholics. There are others, but they are so far in the minority that they barely trouble the scorers. The C of E is so relentlessly vanilla that it is pointless trying to rebel against it. It’d be like walking around kicking puppies.

But I was still in their key demographic… male, a bit of a geek, bit of a social outcast, not a church-goer, and with an oblique sense of humor, so maybe I would have got involved with it. Thinking about it, I’d probably only have joined up in a wishy washy, C of E type of way… I’m not going to sit through any boring services, but I might buy a pot of damson jam or a home-made Victoria sponge whenever they have a fête.

(Still trying to get you the jist without spoiling it…)

Anyway, the people who started it all off are still at it. More often than not in a gentle, getting on a bit, slightly befuddled, “did we really do that” way which I found effortlessly charming. As a joke, back in the early days, they ‘found’ a prediction purported to be from J.R. ‘Bob’ Dobbs saying that 5th July 1998 was to be ‘X-Day’ when their version of the rapture would take place at 7:00 a.m.

At the time, they chose that date because it was so far in the future that the whole daft idea would probably be forgotten… whoops! So now the film starts with footage of X-Day No.19, held in 2017.

There were high spots and there were low spots in this mad little movie. The low spots were usually caused by outsiders getting the wrong end of the stick and refusing to let go. But that probably explains why their main slogan is “Fuck them if they can’t take a joke!”

If only I’d been able to see J.R. ‘Bob’ Dobbs and the Church of the SubGenius forty years ago…

chevron_left Indie Movie Review – Call Me Brother
Is there anything extra during the end credits of Honest Thief? chevron_right