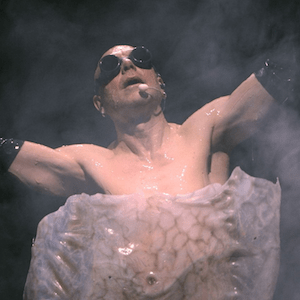 My word…this makes a change! Normally I spend the first couple of paragraphs bitching on about how this film is not the genre I usually like, or that film is aimed at a totally different demographic to the one I inhabit, and then go on to use that as my reason for not liking it — or to highlight my surprise at enjoying it. I’m An Electric Lampshade, unusual title notwithstanding, rings quite a few bells with me! It’s a case of “there, but for the grace of (insert personal choice of deity), go I”.

I’m An Electric Lampshade tells the story of Doug McCorkle. Doug was not popular in school, worked in an unexciting office job, and has dreams for life after retirement. So far then, Doug and I are three for three!  Throw in that I do enjoy a good documentary and you start to see why this film has landed right in the middle of my wheelhouse.


Actually, ‘documentary’ may be pushing the definition a bit; I’m An Electric Lampshade is something a wee bit more than that.

I’ll Never Be Old Because

I’m An Electric Lampshade starts with scenes of an enthusiastic crowd at a live concert. On stage is what appears to be a two-metre tall fibreglass model of an Oscar statuette. Cut to a brief, dreamlike section featuring a half naked bald guy doing some avant-garde dance moves, with a voice-over saying about how he used to watch Michael Jackson Live at Bucharest, and Talking Heads’ Stop Making Sense. His wife would tell him that he could do that.

Before I go on, I have to say that the voice in question is a very rich, deep voice. It’s not wildly dissimilar to what I think my voice sounds like — until I have the misfortune to hear a recording of it.

Another brief scene later and we are in the car park of one of the most tedious-looking buildings around. Honestly, if a building could talk, this one would scream, “nothing interesting happens in here”.

Apart from a wonderful voice, Doug is being set up as a slightly more vibrant pastime than watching paint dry.

Old Is Always 15 Years Older Than I Am

But Doug is not boring. Doug is not dull, dry, or tedious. Doug has dreams. Doug has been introduced to more recent musical acts than Michael Jackson or Talking Heads. Doug has had a wee taste of performance in his youth and at a work talent show. Doug has the bug! He keeps himself fit, takes singing, dance, and movement lessons, and spends time in a studio. He shaves his head and gets his ears pierced. Then he retires and gets out his pipe and slippers.

Well…no. He goes off to a finishing school for performers (for “performers” read “drag queens”) in Manilla and prepares for a live concert in Mexico City.

The preparations involve some very weird, but well-executed, dream-like scenes, including one which has him in a dance-off with a Doug/Voldemort hybrid — and lots of separation anxiety for both Doug and his wife Gina.

There is also an interesting scene of him performing Lily Allen’s The Fear while decked out like someone had mixed up their books on Kinbaku and ikebana. I like the original and I like Doug’s cover version; it was an interesting and enjoyable interpretation of the song.

Either way, it was an interesting and entertaining film and I think Doug McCorkle could go on to do a lot more.

chevron_left A Useful Guide That Will Help You Become A Successful Film Producer
Is there anything extra during the end credits of The Eternals? chevron_right