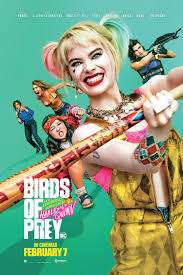 Birds of Prey And the Fantabulous Emancipation of One Harley Quinn comes out on February 7.  I, for one, cannot wait to see Margo Robbie return as the clown princess of crime.  I’ve loved the character Harley Quinn since I first saw the episode “Mad Love” on Batman: The Animated Series.  If you’re a Harley fan too, you may want to check out some of her other cinematic adventures.

Note: The following are all animated feature films. Watch them anyway. 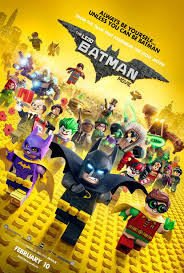 Harley (voiced by Jenny Slate) has a sizeable role in this spin-off from The Lego Movie.  She helps the Joker as he tries to exact revenge on Batman for hurting his feelings.  In this movie, Harley sports red and black pigtails, like she does in the early days of her solo comic book series.  This movie is rated PG for rude humor and some action.  It is appropriate for kids. We’ve reviewed it positively here. Good stuff. 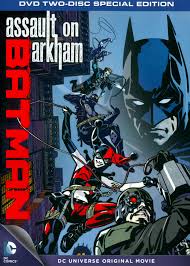 Harley (voiced by Hynden Walch) and Deadshot are recruited as part of The Suicide Squad to break into Arkham and retrieve a microchip from the Riddler’s cane that has all the past, present, and potential members of the squad on it.  Harley gets distracted from her mission by the Joker and they have something more than a lover’s quarrel.  This is a good appetizer before seeing Birds of Prey as it shows the bad blood between Harley and Joker.  Harley’s look alternates between her harlequin outfit with a bare midriff, to a plain clothes Harleen Quinzel with blonde pigtails-style.  This movie is rated PG-13 for violence, sexual content, and language. 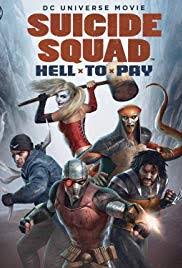 This R-rated, straight-to-video release has the rough and gritty feel of a ’70s revenge drama.  This one is not for the kiddos, with its violence and adult themes.  Harley (voiced by Tara Strong) makes for good comic relief amid the action sequences.  Like Assault on Arkham, this movie features a different set of Suicide Squad team members than the live action film, but it does reunite Harley with Deadshot.  Amanda Waller is dying and sends the team to retrieve a literal “Get out of Hell free” card.  Harley’s look in this film is more original, less inspired by the comics.  She has her classic harlequin outfit and white makeup, but no hood.  She has large blonde pigtails and her signature mallet. 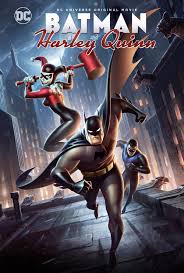 For the true Harley Quinn fan, this one is pure frosting.  How much more Harley can you get?  To quote Spinal Tap, “None more.”

Bruce Timm wrote and produced this feature, so it has the look and feel of an old Batman: The Animated Series episode.  Except this one’s PG-13 for language, violence, and sexual content.  Batman and Nightwing are forced to team up with Harley (voiced by Melissa Rauch) to find Poison Ivy, and stop her from turning Earth’s population into plant people.  It’s a lot of fun to watch Batman stuck with one of his most annoying enemies, kind of like a Gotham version of Midnight Run.  Despite her second billing in the title, Harley pretty much drives the bus, er, Batmobile in this one.   She sports the classic look from the ’90s cartoon series.

If you love Harley Quinn, this is just the tip of the iceberg.  She appears in some other films as well.  But she also stars in graphic novels, video games, and TV shows.  She’s a very busy woman.  Her Wikipedia page and your local comic book store can point you in the right direction.

1 thought on “Harley Quinn Adventures You May Have Missed”