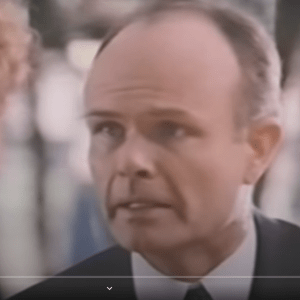 It’s always nice to be able to tick off a few categories in one go. Short feature – tick, Groundhog Day theme – tick, another chance to watch the awesome Kurtwood Smith – tick, tick, tick!  12:01 PM ticks all the boxes. Well… sort of. The “sort of” comes from the fact that 12:01 PM was made in 1990 and Groundhog Day came out in 1993. Perhaps we should start calling them 12:01 PM themed films…

12:01 PM starts with a bemused and bewildered Myron Castleman (Kurtwood Smith) blinking in the light as he stands on a small (≈1m ø) traffic island with traffic hurtling around him. From here he heads to a park for his lunch where he encounters various people and events; a couple of men talking, a group of city types, a beggar, a woman sketching.


He’s obviously aware of being trapped in a loop and can’t understand why or how to break free.

And You Thought Phil Connors Had It Bad

A big difference between 12:01 PM and Groundhog Day is that while Phil Connors had a day to do things, like study French literature and playing the piano, Myron Castleman only has fifty-nine minutes to play with before the crackling sound and swirling lights indicate that he’s about to reappear on his traffic island.

As a result, he struggles to do anything meaningful, until one day he comes across a newspaper that has a story about a Nobel prize-winning physicist (who looks disturbingly like Jeff Bezos), which sets him off on a search for answers. Obviously, with regard to spoilers, any more and that cat is not only out of the bag, but climbing the curtains and shredding the nets.

Instead, I’ll talk about Kurtwood Smith

I first became aware of him as the delightfully evil Clarence Boddicker in RoboCop. He is one of those actors who can’t help but draw your eye to them; Michael Ironside, Christopher Walken, and any of the Buseys are others. As well as being striking to look at, the guy can act. 12:01 PM is only twenty-five minutes in length but, despite that, there is a whole range of emotions, reactions, and responses on display — and Kurtwood nails them all.

So It’s The Same But Different?

Whereas Groundhog Day is an out-and-out comedy, 12:01 PM is listed as a Sci-Fi Thriller, but I would have said it was more of a Philosophical Drama.

There is a scientist, the Nobel prize-winning Professor Nathan Rosenbluth (Don Amendolia), who wears a white coat and talks about “consciousness being an independent variable outside the mechanism of the universe” — but that’s about it, unless you count the swirly light reset sequence which looks a bit like someone had seen the “Star Gate” sequence of 2001: A Space Odyssey once and then been given a packet of crayons and asked to animate it from memory.

As for other differences, I’d say that you need to trawl through YouTube and find 12:01 PM and watch it. There are far fewer laughs along the way and the ending is not what you’d normally think of as happy, but it is definitely worth a half-hour of anyone’s time.

Be warned though that you need to search for 12:01 PM, as there is a made-for-TV film called by the much snappier title 12:01.

This year’s best GHD hit (on Hulu): Boss Level is excellent in almost every way —