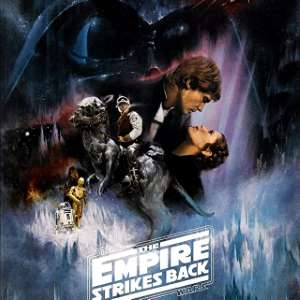 Our first catch of the day

The Empire Strikes Back will be impossible to review. Beloved films are always difficult to do justice to without a lot of hand wringing and mental gymnastics. And for a Star Wars movie at the top of its game (a feat never repeated since), it’s even harder. I mean, come on: it’s STAR WARS. My bedroom is almost a shrine to Star Wars. I have a talking Yoda, a cooing Porg, a Darth Vader alarm clock, a BB-8 nightlight, a vintage Star Wars lunchbox containing morning vitamins, and a three foot Storm Trooper helpfully holding up my necklaces. It’s a geek nirvana.


Luminous beings are we, not this crude matter

I also wear Jedi robes to San Diego Comic Con each year. The philosophy of the Force has been muddled over the intervening movies, but for me, it’s still about how we are luminous beings, and how compassion, selflessness, self-knowledge, enlightenment, healing, mercy, and benevolence are the paths to unlocking the secrets of existence. This is the movie that most fully explains the ways of the Force. Forget midichlorians. As with Australians, my religious affiliation is Jedi.

So how does one write about a movie that shaped one’s spirit and destiny from tender youth and includes a rewatch every few years?

Never tell me the odds

I’m listening to the soaring John Williams soundtrack as I write this. It’s one of the best soundtracks in the galaxy: each “theme” is iconic. This is how it should be done (take note, audio-wallpaper-sound tracks in Star Trek).

As I watch Empire with Peetimes in mind, I’m seeing things I missed a dozen + times on previous views. RunPee makes me a better observer, as I see more reaction shots and background moments. I never noticed before that Luke pulls a snake out of his X-Wing engine as he preps to leave (on Dagobah, with Yoda imploring him to stay.) It’s a small moment, but cute. Dagobah is a herpatelogical paradise, isn’t it? Even Honest Trailers says Dagobah is made of snakes.

And note, even Honest Trailers has nothing bad to say about this benchmark blockbuster.

I also noticed more Obi-Won lies…did Obi-Won EVER seem angry or impetuous as a youth, even though he tells Yoda he used to be? From what we see in The Phantom Menace, he’s so laid back and rule-compliant that I seriously doubt it. Qui-Gonn Jinn was the rebellious Jedi. Obi-Won was always a stick-in-the-mud.

I guess we just have to let these prequel problems go. Prequels are generally problematic in movie history. Can you think of a really good one?

Why, you stuck up, half-witted, scruffy-looking…nerf-herder

The romance: I didn’t even notice Han as a sex symbol in the first film. I was like ten, so I can be excused. I did think Luke was cute. But then Han stepped up in Empire and made me see how hot and exciting he was. I was hooked. Harrison Ford was the man I wanted. When I met my husband-to-be — a geek like me — when I first said I loved him, he replied, “I know.” How’s that for knocking it out of the park? My wedding march was indeed the Throne Room theme from A New Hope, so our nerd credentials are complete.

See Empire now on the big screen: Do. Or do not. There is no try

Currently, in the limited box office we have in the Summer of the Pandemic, Empire ranks number one. Something like a thousand drive-ins in the US are showing Empire to grateful, excited crowds. It’s been a very long time since audiences could see this second and best Star Wars film on the big screen. With the great score and a parking lot full of lifetime fans, it sounds like an exciting experience.

Go support your local drive in. Times are hard right now and the Empire is always lurking. 😉

We now have Peetimes up for Empire Strikes Back on the RunPee app. Just do a search for it on the top right hand menu.  Do you agree with the Peetimes we chose?

chevron_left We’re Adding Classic Movies to the RunPee Database
Is there anything extra during the end credits of Star Wars: The Empire Strikes Back? chevron_right