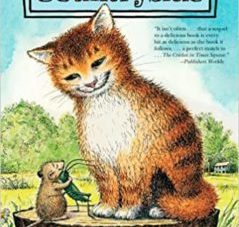 Tucker in Tucker’s Countryside (1969) is the mouse from the extraordinary and renowned children’s book The Cricket in Times Square. Here the mouse gets his own heroic tail. Or, er…tale.

In Cricket — the origin novel (and animated children’s special) — small and lonely Chester Cricket gets accidentally trapped in the New York Square Subway Station. He’s befriended by Tucker Mouse and Harry Cat, two critters living in a drain pipe under said station. Chester learns to play his wings like a violin, and brings a moment of sublime joy to busy, harried New York travelers. I get goosebumps remembering this story. It’s luminous. A highly recommended read for all ages, even today.


So, a cat, a mouse and a cricket walk into a bar…

Tucker’s Countryside picks up a few months after Cricket ends. Here, Tucker and Harry are called on to help Chester — safely returned to the gentle ‘wilds’ of Connecticut — save his beloved meadow from being bulldozed under to build apartment buildings.

There’s a large assortment of ‘various and sundry’ animals in Tucker’s Countryside, making the Cricket Universe a bit larger. Countryside is not quite up there with Cricket, but it’s well-told and charming, with a crucial message about the importance of saving natural spaces. The animals who live there need them, and we humans need them. If you’ve ever played in the woods or a stream, or just sat under trees in the sun, you’ll find yourself happy with how the book ends. And maybe inspired a little by Ellen and the gaggle of young kids who learn how to make a difference.

That Tucker uses a bit of subterfuge (and minor thievery) to resolve things merely adds to the fun hijinks. At least prim Chester Cricket is properly abashed.

George Seldon is cooler than I knew

Something I really appreciated is hidden in the title pages: author George Seldon credits JRR Tolkien as a literary inspiration, to which: YAY! Mentioning The Hobbit and Lord of the Rings even indirectly makes me happy.

If I’d known that 1) there were sequels to Cricket, and 2) the author was a fellow Tolkien fan, I would have tracked down the rest of the series STAT as a child. As it is now, I’m pleased to note that I have the next novel ready to read: Harry Cat’s Pet Puppy. The only one I need to track down is Chester Cricket’s Pigeon Ride — which sounds silly, but I’m sure works out just fine.

UPDATED NOTE: It seems there are SEVEN novels in the series of “Chester Cricket and His Friends” according to Amazon, but it’s hard to track down the subsequent books in paper form. The whole list is available on Kindle, however.

Now calm down there, Mousiekins

The gentle friendship between the three main animals is fantastic. Who knew an insect could carry a series? Well, okay, besides writers from animated movies like Antz and A Bug’s Life. But Seldon’s novels were penned in the 1960s!

Although this is the easily excitable Tucker’s story, Harry Cat wins my heart. He’s surprisingly warm and gentle for a large tomcat, managing Tucker’s mood swings without once belittling him. Harry seems to be the trio’s emotional glue. He also has a great moment of heroism that anyone who read Watership Down saw coming from miles away. However, since Watership Down was published in 1972, Richard Adams clearly cribbed the idea off of George Seldon.

There’s a nod at the end where the meadow’s field mice cheer for the cat, noting how bizarre that exact situation could ever be in any normal situation. I look forward to the next story that centers about Harry.

Tucker’s Countryside is recommended for all. For anyone who loved The Cricket in Times Square, it’s a gotta-do. Sweet lines drawings scattered throughout add to the magic. (167 pages)

The Cricket in Times Square on Amazon

Or watch animated version of The Cricket in Times Square on Amazon, or free via Dove

COOL FREEBIE! Listen to the entire The Cricket in Times Square book reading on You Tube!