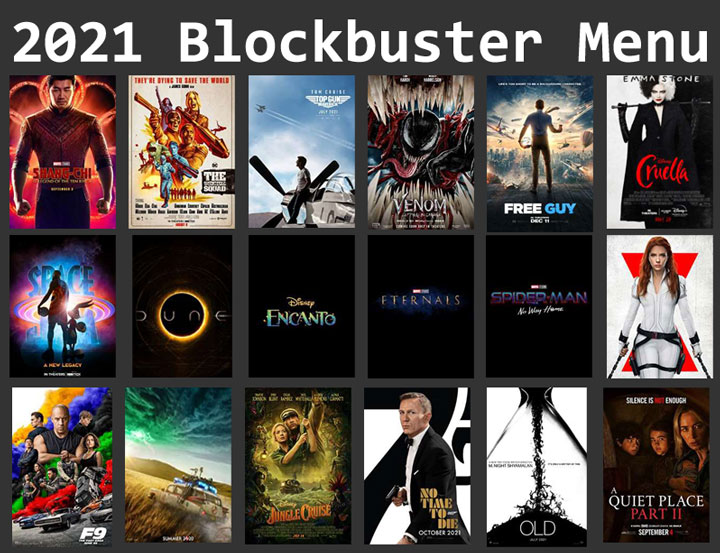 It looks like blockbuster movies are all set to get back into the summertime groove, very soon. The season kicks off with A Quiet Place Part II, at the end of May and it seems like another blockbuster follows every few weeks. To say nothing of FOUR MCU movies before the year is out. (They have some catching up to do!)

Without further adieu, here’s a list of the prominent movies scheduled to be released. Let me know in the comments if there’s something you think I missed. I didn’t try to list every movie, just the noteworthy ones.

Plot (Spoilers)
Following the events at home, the Abbott family now face the terrors of the outside world. Forced to venture into the unknown, they realize the creatures that hunt by sound are not the only threats lurking beyond the sand path.

Plot (Spoilers)
The world’s top bodyguard gets a new client, a hitman who must testify at the International Criminal Court. They must put their differences aside and work together to make it to the trial on time.

Plot (Spoilers)
Cypher enlists the help of Jakob, Dom’s younger brother to take revenge on Dom and his team.

Plot (Spoilers)
A film about Natasha Romanoff in her quests between the films Civil War and Infinity War.

Plot (Spoilers)
NBA superstar LeBron James teams up with Bugs Bunny and the rest of the Looney Tunes for this long-awaited sequel.

Plot (Spoilers)
This summer, visionary filmmaker M. Night Shyamalan unveils a chilling, mysterious new thriller about a family on a tropical holiday who discover that the secluded beach where they are …

Plot (Spoilers)
Based on Disneyland’s theme park ride where a small riverboat takes a group of travelers through a jungle filled with dangerous animals and reptiles but with a supernatural element.

Plot (Spoilers)
Supervillains Harley Quinn, Bloodsport, Peacemaker and a collection of nutty cons at Belle Reve prison join the super-secret, super-shady Task Force X as they are dropped off at the remote, enemy-infused island of Corto Maltese.

Shang-Chi and the Legend of the Ten Rings

Plot (Spoilers)
The movie, based on Marvel Comics, will focus on Shang-Chi; ‘The Master of Kung-Fu’.

Venom: Let There Be Carnage

Plot (Spoilers)
Feature adaptation of Frank Herbert’s science fiction novel, about the son of a noble family entrusted with the protection of the most valuable asset and most vital element in the galaxy.

No Time to Die

Plot (Spoilers)
James Bond has left active service. His peace is short-lived when Felix Leiter, an old friend from the CIA, turns up asking for help, leading Bond onto the trail of a mysterious villain armed with dangerous new technology.

Plot (Spoilers)
The saga of the Eternals, a race of immortal beings who lived on Earth and shaped its history and civilizations.

Note: the video below isn’t actually a trailer for Eternals, although there are a few brief clips in there. That being said, if you’re an MCU fan this video is a much watch. It gave me chills.

Plot (Spoilers)
When a single mom and her two kids arrive in a small town, they begin to discover their connection to the original Ghostbusters and the secret legacy their grandfather left behind.

Plot (Spoilers)
After more than thirty years of service as one of the Navy’s top aviators, Pete Mitchell is where he belongs, pushing the envelope as a courageous test pilot and dodging the advancement in rank that would ground him.

Plot (Spoilers)
A young Colombian girl has to face the frustration of being the only member of her family without magical powers.

Plot (Spoilers)
A continuation of Spider-Man Far From Home

Plot (Spoilers)
After the Kingsman’s headquarters are destroyed and the world is held hostage, an allied spy organization in the United States is discovered. These two elite secret organizations must band together to defeat a common enemy.

Plot (Spoilers)
Buster Moon and his friends must persuade reclusive rock star Clay Calloway to join them for the opening of a new show.
Facebook
Twitter
Pinterest
LinkedIn