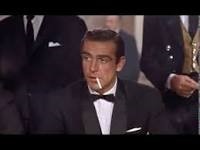 Super-suave spy James Bond is not just equipped with a license to kill; he also packs a pretty mean set of skills as a gambler, which is a character trait explored both in the original books and the movie franchise.

There have been several iconic gambling moments across the 26 films released to date, so here is a look at the best scenes where bets are placed and the odds are stacked against our smooth-talking hero.

Introducing a new generation to Bond in the mid-1990s, GoldenEye is packed with memorable vignettes, including a particularly spicy showdown between Pierce Brosnan’s 007 and Famke Janssen’s femme fatal Xenia Onatopp.

Meeting at a casino in Monte Carlo, the pair duke it out over a game of baccarat, trading quips and building tension. Bond gets lucky and triumphs on the table, but he’s forced to chase the voluptuous Russian agent from the table and continue attempting to get the measure of her while ordering his cocktail of choice.

While baccarat may not be as popular as some other casino games today, especially as sites like Casumo casino have helped elevate slots above traditional table games, it is still entirely in keeping with the retro-chic atmosphere of Bond movies, and is used efficiently and effectively in this entertaining encounter.

Just over a decade after Brosnan’s Bond reignited the series, Daniel Craig took over the role for yet another major reboot and Casino Royal remains the most critically acclaimed of the modern outings.

There are lots of great gambling moments littering the movie, with several scenes taking place exclusively at the table where hands of Texas hold ‘em are played for some of the highest stakes imaginable. Even so, the most electric moment occurs when Bond is poisoned during a crucial point in the game.

Excusing himself to rush to his Aston Martin, counteract the deadly concoction and apply a defibrillator to avoid cardiac arrest, Bond is literally gambling with his own life and manages to recover enough to return to the table and win the $115 million pot.

Sure, there is something alluring about the old school elegance and opulence of the casinos portrayed in earlier Bond movies, but perhaps the most beautifully shot and framed gambling den to appear in any film in the franchise is the high end venue visited in 2012’s blockbuster hit Skyfall.

Arriving by boat, surrounded by floating lanterns and fireworks as the strings soar in the superb score, Bond is not here to place any bets, but rather follow an important lead. Moneypenny is on hand to help out, and it is a visual treat to see the way that the long, well lit tables are laid out and packed with players.

The fact that he does not hang around to actually put any chips on the line is irrelevant; it shows how much the films have evolved over the years, while still staying true to the source material. The fact that Bond gets into a brawl with some henchmen and narrowly avoids being ravaged by a komodo dragon, without even leaving the casino, is all par for the course.

After discussion gambling in some of the more recent Bond movies, it is a good idea to look back to the one that started it all. This 1962 classic may seem a little slow paced by today’s standards, but it still holds up in many ways and essentially created the framework that the rest of the movies would follow.

Meeting Sean Connery’s Bond at a Chemin de Fer table, we get to hear him utter his immortal introduction for the first time. It is not the high stakes that matter here, but the way the character is established so immediately; we know everything about him without needing excessive exposition.