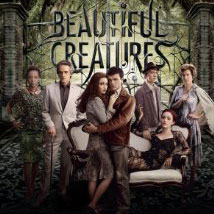 Beautiful Creatures did it’s job as a movie. I was entertained for the entire two hours. The cast was awesome. It was visually appealing and it left me wanting more. I knew it was based on a book but I did not know it was a series of four books. I won’t give away anything here for those of you that haven’t read them but the ending of the movie had me scrambling home to download the book and figure out what was up with the ending. That was when I discovered there are three more.


Okay, mystery solved for me. I am a terribly impatient person so I downloaded all of them and shall read them this weekend. I might change my mind about how much I liked the movie once I read the book because lets face it, books are always better than the movie.
I’m super impressed with the cast. Jeremy Irons was great. I’ve only seen him as the villain in movies before and where he is bad in this movie he was bad for all the right reasons.

Emma Thompson has never really inspired me to be all fuzzy inside but she pulled out a pretty respectable performance this time.

The real shining star in *Beautiful Creatures* for me was Alden Ehrenreich. I’ve not had the pleasure of seeing him in anything before but he knocked my socks off. His voice, mannerisms and just plain All American good boy attitude was terrific.
The costumes and sets were amazing. The color combinations that they chose were dead on right. I think I enjoyed the visual aspects of this movie the best. Whether they were filming inside or outside they seemed to pay special attention to complimenting the set with the costumes.
I will be looking forward to the next three just to see how they can improve upon the first.